I picked up two definitions of ‘Bird Brain around the Dictionaries; ‘A person regarded as silly or stupid’ and ‘an annoyingly stupid and shallow person’.

For me, it’s just as easy to call a person ‘a prat’, who is someone so silly they fall on their buttocks (hence the village in Kent named ‘Pratts Bottom’).

So, at what point in history did someone decide upon this phrase and from what observations. I’ve spent many an hour or two watching out feathered friends go about their business and have still to find them do something stupid.
Is it simply that, due to most of their sizes, they have a small one? That’s true of course and they are not blessed with the brain of the human which shapes itself at a ninety degree angle to the spinal column, this is what apparently makes us human’s unique and intelligent.

I know a lot of people with a lot of intelligence, but to be honest, some of them are prats !

I’m no Bill Oddy, I’m not a Twitcher, but I love watching these mostly harmless creatures going about their business in their self-sufficient and efficient manner. 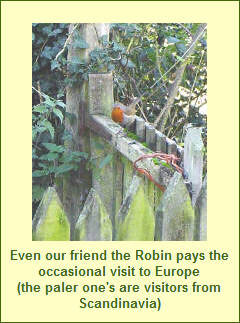 Swallows, House Martins and Swifts can navigate their way to southern Africa without the assistance of a map or Sat Nav. They go by smell, the Sun, Stars, magnetic fields and Landmarks.

A bird will find exactly the same Summer / Winter home as it had the previous year, where it will rehouse itself using what’s around it, without the assistance of Concrete, Roof Tiles and Underfloor Heating.

A bird ten houses down the road will know the minute you refill the Bird Feeder.

There are other sides to Birds as well. I visited the terrible Dachau Prison in Germany a few years ago and mentioned afterwards that I suddenly realised I hadn’t seen or heard any birds. I thought it was just one of those things until I read that this is fact and not just an off day – why?

So how can a creature as smart as this be associated to stupidity. When we’ve finally done our efficient job of seeing this World off through our resource greed and irresponsibility, who will be blaming who? I reckon the birds may have a case!
After all, they were around before Man and I reckon with their intelligence, they’ll still be around after us as well !

Until that time comes, we can at least acknowledge their cleverness by trying not to make any more species extinct either by ensuring they have enough food when times are tough and supporting Organisations who have weight to make a better future.
Another good starting point would be to stop pulling down their homes – the Tree’s !