There are quite a few of us who have battled away against Factory Farming Chickens, both for food and for egg production and this was really championed onwards and upwards last year by Hugh Fearnley Whittingstall and Jamie Oliver. 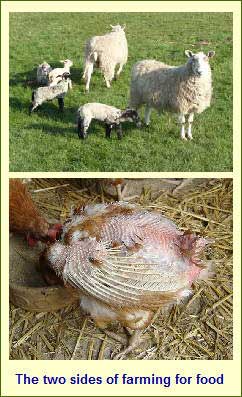 After watching their TV Programmes on the subject, hundreds of people took to keeping their own Chickens for eggs and buying only Free Range Chickens for their Sunday Roasts.
The Down the Lane Website received four times the amount of visitors in 2008 compared to 2007.

For Chickens raised and kept in Prison like conditions (in fact, worse), there was a light at the end of the Tunnel.

Many on lower incomes juggled their few spare pennies around to buy in a more ethical manner, this giving a major wake up call to Supermarkets and Government.

Then – smack, bang, wallop, the Bankers who we all trusted and respected, fouled things up and we’re knee deep into a financial crisis.

Beside the obvious ways it’s going to hit us like Mortgages, Loans, Taxes and most importantly Jobs etc. it will also reduce the amount we have to spend on the more essential things – like food and clothing.
Once again, people will be looking around for bargains, even those who didn’t have to before, will be.

So the fear is, will people once again be forced into buying such things as Indoor raised Chickens to eat and Battery Eggs – I fear so.
It seems that Chickens are way down the list of importance to many. Unlike some other Livestock animals, Chickens seem to be seen more as an item than a creature with a brain, albeit small.

Maybe driving around the Countryside, we only see the Lambs and the Cows grazing, so they’re seen as more ‘cuddly’ or ‘real proper animal’. They’re in green fields and conquer up the ‘ye olde English Farming’. So the simili’s go on.

On the other hand, there will be far more people wearing a frugal hat and this could well increase the recent trend of growing our own Vegetables and maybe keeping a couple of Hen’s in the back garden. Let’s hope so.

All I would say is, even if the Credit Crunch is affecting your Wallet – don’t allow it to affect your heart.