It seems hardly a day goes by down the Lane when something of International importance isn’t taking place. Today was no exception 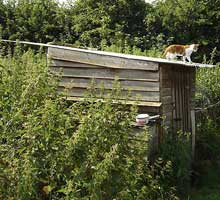 For eight proud years, Nettle Cottage, built from a three sided Shed, had stood with dignity against the backdrop of Nettles and two Compost heaps. But the years of hosting some 60 or 70 Chickens, countless Rats and Mites of all colours had taken it’s toll and today saw the change over to the Chickens new home, ‘New Nettle Cottage’ (I thought of that). One thing I should say is the
Cottage isn’t exactly new, it is in fact, my old Office which became too small for my ever growing Empire and to celebrate that, the Nesting Boxes and Shelf for Poo droppings is actually a Computer Desk carefully designed to acknowledge the surroundings. The work top was used for other purposes (covering the coal bin), so this was substituted with a Wardrobe Door from two doors down. 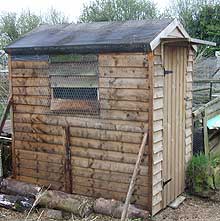 Purposely, I have made the window small as I broke the Perspex trying to cut it and the Vinyl flooring doesn’t quite go wall to wall as it wasn’t big enough.
But all’s well that ends well and no sooner had I finished the Project, four Hens came in and made themselves at home.

As I write, nightfall has come upon us and I’ve just ventured up to see it’s all OK. The four Hens are most content in the same position and the other six are sleeping in the covered feeding area outside. I assume this is because of the warm Spring evening rather than they just don’t like their new Home.

Tomorrow, after I have gathered the eggs from everywhere but the nest box and assuming it hasn’t burnt down during the night, I shall set about the final task of what I call ‘Project Spring Chicken’ and replace the bit of wood which was leaning up against the side of Nettle Cottage allowing Ginger the Cat to go up on the roof and wonder why he went there. Another success story from Down the Lane