It raised my heart and hopes the other day when I saw that a 2,500 strong band of Scouts, male and female, went ahead to have a Winter ‘Jamboree’ type Camp. 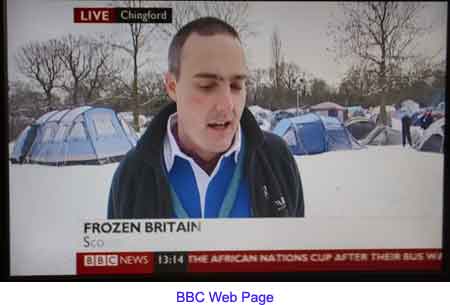 I’ll begin with the ever present, “when I was a lad”, but it’s true. When I was in scouting, from 1955 to about 1970, health and safety was an unheard of expression, we used to call it common sense! As the years rolled on, it’s become can do this and can’t do that, mainly the latter.

In the late 1980’s I returned to scouting as a Leader. I was horrified when I announced the dates for my first Summer Camp, upon a discussion with the lads it soon became apparent they were expecting ‘to camp’ in a building and would be using Gas to cook on.
I flatly refused to lead a camp outside of tents and cooking on the open fire, memories of the Steam Pudding delicately tied above a fire, the smokey taste of toast and glorious fry ups usually a tad overdone but crispy were above negotiation.

I then came accross a ruling I couldn’t take them over 1,000 without some certificate or other, but thankfully the lads had parents who wanted their boys to learn more the hard way and they agreed they would go as friends rather than under the flag of an authority. We were after all only going up a few big hills rather than Snowden, Ben Nevis or Scafel Pike.
In fact, I’m proud to say that in the four or five years I did it, the Scout Group grew from around 12 to about 40 and we could have had more had it not been the four scouts to one leader equation or whatever amount it was.

So I watched the BBC News Bulletin with great joy, not only were they camping out in snow and below zero temperatures, they were enjoying it and everyone who was asked what they thought about it came back with a positive reply that it was good for toughening them up a bit.

I have t say I was amazed they allowed it to go ahead, they won’t let you go above 1,000 in the middle of summer, but quite OK about minus 6 and snow in January!!

I fully appreciate that lad os today find the Uniform and a badge system a bit old and in some cases ‘sissy’, but it’s not just about that, it’s about exploring, using non gadgetry to find you way around, canoeing, hill walking, rafting, all sorts of things and all wrapped up nicely in a kind of survival wrapping.

I hope that at least some young lads and lassies saw this feature on the News and may have had a small interest in going into Scouting, I strongly believe that society would be far better for it.