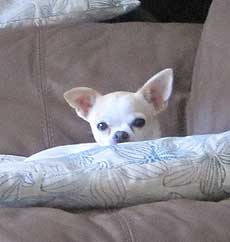 The one thing you have to remember when you’ve been asked to look after the Grandchildren for a few days is that it’s not just the Grandchildren you’re looking after, it’s a plethora of pets and many other things which at a flick of a switch or movement of hand or feet can lead to disaster.
Here’s a few observations of my ‘relaxing’ few days with the family…

In this case, it’s two cats, one Chiwawa, a Tortoise and a few so small fish found in a pond, you’re not sure if they’re alive or not.

One of the cats is relatively new to the Household. Luckily, she’s a fairly docile thing and doesn’t seem to mind the dog springing on it whilst in deep sleep .
This is followed by friendly pursuits by both parties which does not take into account the people and items of furniture which are in the way.
One pursuit ended up with me dropping the house key onto the said passing dog which caused it to slide along the floor and by a 5,000 to 1 chance found the one gap in the skirting making it drop the eighteen inches or so to the ground underneath – never to be found again. 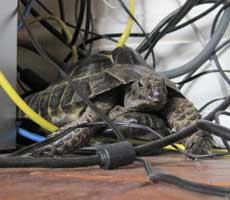 The Tortoise is quite clever I have to admit. He’s in a large tank about 12″ above floor level but has learnt to slide the door open and do a death defying leap to the floor below. Often this results in him being the wrong way up, but somehow he rights himself.

His course around the house after escaping is usually the cat / dog food bowls followed by attempting to ascend and descend the Cat Flap. Luckily this is a little too high for him, but who knows, in another 30 years, he may have conquered this!

After a while, he settles down either behind a curtain or next to the PC Tower Unit where he baskes in the electrical heat.

The other cat has actually got a little brain and just stays out the way. He is quite happy to hide in a bedroom venturing downstairs only occasionally to launch a surprise leap onto your lap just as you’re clicking the ‘save’ button on the PC.

As for the fish – waste of time really! 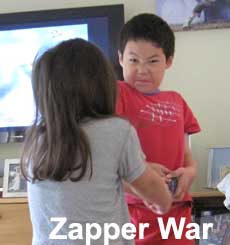 Overall I have to say they’re good and find their own amusements.

This morning I was entertained to a game of Cluedo. I started to arouse suspicion when I was told they would shuffle the cards whilst I made a cup of Coffee. Upon my return I had my cards given to me and the game commenced.
It will come as no surprise when I say it lasted about 10 minutes. The card shuffling certainly seemed to favour their game!!

Sitting at the table as I do for a bit of quiet time, it is quite pleasant to be in the middle of Sonic in one room and Ben Hem in the other.
Just to add to the quiet of the day, the Builders are converting a Shed at the bottom of the garden. The dog doesn’t like them and the sound of the high pitch yapping is music to your ears – not!

Later, I am told, we are in for an amazing battle on Mario Karts. This game is faulty – every time I’m in a lead with no chance of losing, it suddenly shuts off, “Oh darn it Pop, we’ll have to start again”.

After quite a few stints at Grandchild Sitting I have come to the conclusion that the secret is in the preparation. 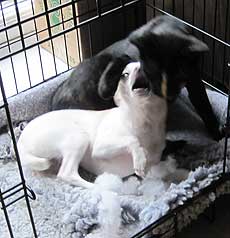 Caution – Looking after Grandchildren can seriously damage your health