My daughter and son-in-law, both ardent and regular Members of a Gym, looked at the travelling time, cost etc. and decided that in the long run it would be more financially effective to have their own at home. 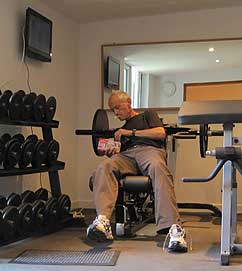 So some weeks later, the outbuilding at the bottom of their Garden filled with the usual collection of garden tools, kids toys and other items we forget about became a brand new home Gymnasium. Now this was completed when I last went down there (I had the responsible and physically demanding job of fixing the TV Aerial up) and I have to say that although I don’t know what 80% of the equipment is for, I’m impressed!

On one of the days I was to be left alone in the House and on departing it was suggested to me that I may like to try some of the equipment out. I was a bit surprised by this, my overall appearance is surely the image of a healthy, young and very active Athlete. But I thought I’d give them a go.
Firstly I should apologize as I don’t know the names of these gadgets, but here goes….

Thing you lay on and go backwards and forwards.

I found this quite easy although I did wonder if I was supposed to put some weights on the stretching part of the machine.
After at least five ins and outs, I decided it was time for a fast reviving Rolly and five Chocolate Digestive Biscuits which I assume would be good to clear my throat of any exhaustion and replenish the calories I had used. 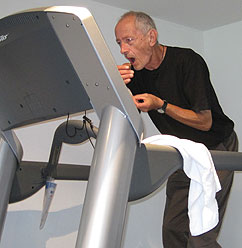 The Running thing with moving floor

This was great fun, their Chiwawa got up to 13.5mph before he slid off the back like Ronnie Corbett did in ‘Is this the way to Amorillo’. So I thought I ought to have a go as well. I’m rather proud to say that after 0.4 miles at a speed of 1.7mph and two Fairy Cakes I was feeling pretty good.
Next time I go I may try the Grandchildren going on it with their bikes, it would certainly save my legs having to run after them going down the hill to the Park and I could put CBeebies on the TV. Seems to me that would be a modern kids dreamworld Gym?

To be honest, I found this very difficult, not that the 2 kilo weights were hard, it was the fact that ’60 Minute Makeover’ was on the TV and not being able to do anything with my hair of late, I was missing it.
Unfortunately I didn’t have any Gatorade or other Sports Drink to hand and it was a choice between half a pint of milk or a bottle of Lager. As the sell by date on the milk was just less than five days ahead I felt I shouldn’t take a chance of an upset stomach and went for the latter. 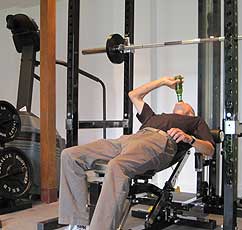 One thing I couldn’t quite grasp was why do they have weights which are more than 2 kilo? I mean, bags of Sugar come in that size and they can easily pull a arm muscle when you’re putting them into a high Kitchen Cupboard. If I brought more than two bags and the Till Assistant says ‘Do you want help packing’, I’d say yes and ask them to help me out to the car with it.

So, all in all after my ten minute thorough work out I felt much fitter, fitter than I was the day before when I fell over the Tortoise trying to find the right remote control from seven to switch channels on the Television.

I rather like the idea of having a Home Gym. I’m already in the process of finding suitable gadgetry and already collected 163 elastic bands with which I intend to make into a chest expander but will probably use it as a Catapult to fire mud at next doors washing.

At the end of the day, I’ve got this far and having a Charles Atlas look alike body is going to make me look more of a Prat than I do already. Back to the drawing board!

Quote – “You only get one body, be good to it and it will be good to you” – John Tutte