One of the reasons I enjoy visiting Southampton isn’t to see how it has progressed with modern easy flowing shopping centres, good one way traffic systems and general accessibility, it’s to see how it has captured it’s past and is actually using it to make things how they were some 100 years ago.

By this I mean the fact that it’s once again discovered it’s place as a thriving Shipping Port.

For years, mainly due to the trend of holiday making of course, it lost it’s way and if it hadn’t been for a reasonably good Cargo Depot and the Isle of Wight Ferries, I’m sure it would, like other Ports, have lost it’s way altogether. 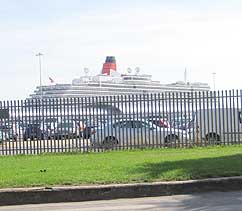 Driving around the Dockside roads now we are still reminded of the days when the romance of Ocean Liners was alive. The old buildings, the Head Offices, the Loading Stations are still standing and in most cases genuinely restored to their former self. Driving and walking around these conjures you to imagine the London Boat Train arriving at the turn of the century loaded with fashionable people about to embark on a trip to America or some other far off Land.

The thoughts of voyages such as the Titantic ring true, even if it is Leonardo Di Caprio and Kate Winslets face which come to mind.

What has happened of course is that in the quest for escape when on Holiday, people are looking to the Sea, but they don’t want a Boat, they want a floating town, a floating Hotel to voyage upon.

This has led to ships being built in the last ten years which have been announced as ‘the biggest’, ‘the longest’, ‘the fastest’, just about every ‘biggest’ you can think of!
Only two weeks ago, we saw the Queen down here yet again to set sail the latest ‘Queen Elizabeth’. I’m not sure of what ‘biggest’ it comes into, but it must boast one of them somewhere along the line.

Another great thing about this Shipping re-birth is the enthusiasm it has kindled with the local community, you can ask almost anyone living there now what Ship’s sailing in or out tomorrow and many will know. In fact, many will know simply because they know someone who works on one of them!