I may have mentioned this before, but some while ago I was browsing around a local Book Shop and I noticed the book entitled ‘PC’s for Seniors’.
I thought that sounded interesting and upon opening a few pages expecting to find some variations on ways to look at PC problems, found it to be no more than any other ‘How to’ book, but in larger type!

At the time that quite annoyed me, thought it was a bit of a rip off, cheeky ageism etc. but I should add at this point it is not just seniors who have problematic eye sight, just that it gets a bit worse as life moves on.

So this leads me on to my moan of the week. I do actually have about five moans a day, but most would just bore you as they’re mainly due to just being a miserable old, or should I say, ageing Git!

There were two things I had purpose to read instructions for yesterday. I’m House sitting for my daughter at present and she has kindly left me with sufficient food to se me through and I have access to all the techo stuff which younger people seem to have nowadays.

I don’t do much frozen food except Peas and they’re easy, chuck them in a Saucepan and about one minute later they’re done, but she had kindly left me a few Pies and so on, so away I went.

Opening the Freezer it was easy to identify what was what, the Marketing Guys at the Food Pie Factory had got it right, big type face, big picture of smiling face peering at the cut open Pie with all the ingrediants showing up well.

Then came the difficult bit, finding a). where the instructions actually were amongst all the other word spillage and b). How to cook the thing.
You had Grill, Oven or Microwave, frozen, unfrozen, best if, best if not etc.

Now the thing is that even with reading glasses, the type these are printed in are obviously designed for a Teenager with A1 eyesight. The problem being that with very small fonts, 6’s look like 8’s.
Well, I thought it said 8 minutes, so one black Steak Pie later, I was not amused.
Also, the Oven is fan asisted and obviously a very modern and expensive model, so not only was I two minutes over cooking, but not allowing for the fact this particular type of Oven would cut the cooking time down by two minutes anyway. 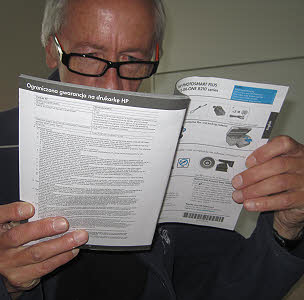 Maybe they should add that variations as well.

The next thing was wanting to print something out. I couldn’t use my Laptop because I’m not networked into the Home System, so I used their PC. Great, except it must be the latest high tech wireless model.

Luckily there was an Instruction Manual quite handy. For this, even a Magnifying Glass wouldn’t have helped much. Not only were there about 400 pages, only two of those were in English and with the font size, it was hard even to find that.

Whilst on this – how hard is it to distinquish the ‘O’s’ from the ‘0’s. How many times have you entered a 30 long registration number into a PC form only to be told it’s wrong – and how many times got a postcode wrong. I say ban anything with an O or an 0 !!

This does rather sum up the Marketing Guys way of thinking I guess. Everything pre-sale is big, bold and spelling out a clear message of what a product is, how good it is and how you really need their product rather than the one next to it.
That’s OK., don’t have a problem there and spending the first seven years of my Career in Advertising, know how it works.

Surely though, these people should take into account that it’s the after purchase experience which is just as important as selling it. Fair enough, once you’ve brought something once, you’ll know how to do it the next.

But please, for the next Product Campaign, get an over 60 with ageing eyesight to design the packet – sales will increase no end !!

Oh., that reminds me, it’s time for my bi-annual Eye Test. At least that’s free, just a case of ensuring I remember where it is !