With Winter nearing an end down the Lane comes a chance of checking around the various parts of my garden for any signs of life and that things are in reasonable order and position for the warmer months.

The Bug House appears to be holding out and I know there are about 4 drilled holes which were used by Leafcutter Bees to embed their Larvae in at the end of last August.
There was much Invertebrate activity as well in Autumn so leaving it untouched through the Winter months will, I hope, bring some fruitful life next month or April. 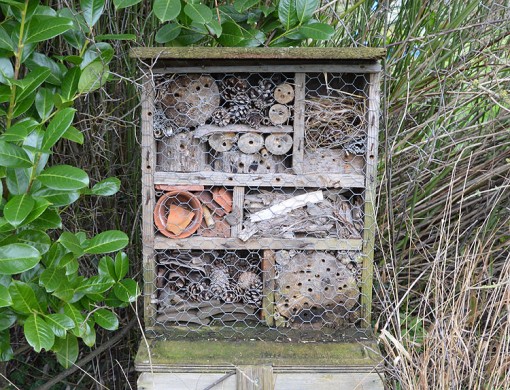 All the Tit Houses and the one Robin House were put up early last Spring but didn’t attract any occupiers, but now they’re weathered in and have a bit of natural surrounding.
My 8 Bird Feeders have attracted all the Tits, Dunnocks, House Sparrows and more through Winter. I haven’t placed all the houses too near the feeders, so here’s hoping!

The same applies to the Bat House I put up high just inside of the open fronted Barn. There are many Bats around here through the warmer months and to be honest they have a wide choice of more natural homes, so I’m not over confident, but it’s there should they wish to use it.
Of course, once they do, no one can move it, fine by me ! 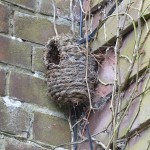 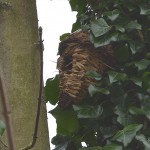 Three of the Tit Boxes around the Garden

It’s nice sitting inside my Office Shed because I know I’m not alone ! Underneath the Common Lizards are enjoying a nice dry and cosy place to spend the Winter.
There are more up the other end of the Garden but I know not where they have their Chez Nous!
I make this an excuse for not tidying up too much around the Vegetable Patch, I’d hate to destroy a Winter Home and possibly losing them. 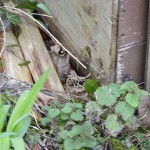 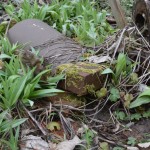 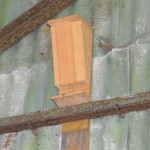 
As far as I know the Hedgehog is still fast asleep in my DIY Hog House.
For about six years I never saw a Hedgehog here, then last Summer two or three seemed to be paying regular visits.
I made three Houses for them and to be honest, again for the reason there are ample natural places for them to stay, I didn’t think they would be occupied. It was one of those things where it’s nice to do but underneath you don’t think it’ll work.

In late October I thought I’d just check them out and the one under the Laurel Bush in which I’d put some dead leaves and twigs appeared more compact. I gently moved the top of them to find a large spiky ball in the corner!
I have to admit I shed a tear ! 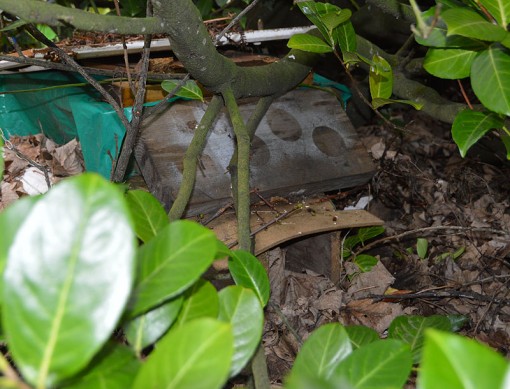 I placed a couple of small twigs in the tunnel entrance to check if he or she was going out or coming in and they’re still there.

I haven’t checked the Frog House, don’t want to disturb one if there’s one there.

So with Spring the excitement comes. Will it all fall into place, will it help? etc.
I look forward with hope!