A motivational game of Golf

I was about 25 at the time and living in Tunbridge Wells, I played the occasional game of Cricket and enjoyed, as I do today, the outdoor life.

My brother-in-law was a keen and pretty good Golfer and one day asked if I’d like to have a round with him. I explained I’d never played before and didn’t have any Clubs or other items required.
He said not to worry as I could borrow his Father’s old set which had been gathering dust in the Garage for some 20 years, he had a spare glove and I could hire out some shoes at the Golf Course. 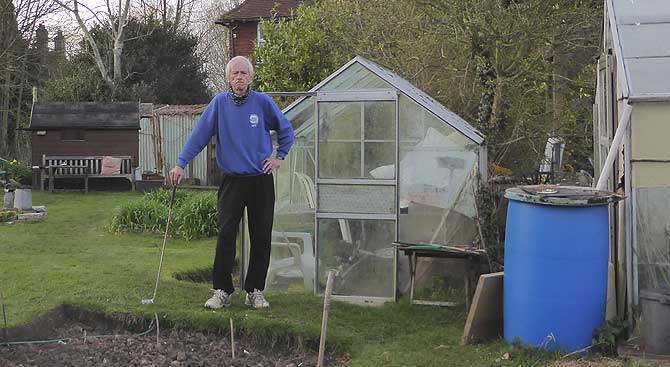 Off we went, arrived at the Course, paid the money due and before I knew it I was on the first Tee, the Hole being a par 4.

Innocence and I guess ignorance came into play. I got the Driver out the Bag, placed the ball on the Tee, looked to see where I should aim for and hit the ball as hard as I could.
Incredibly the ball went like a rocket, straight as a die down the centre of the Fairway some 200 yards. That left about 160 yards, he told me the Club to use and again looked at the hole and hit it to within about 20 feet of the hole, three putts, one over par.

Cutting a long story short I went round in 93 beating him by some 10 strokes and he’d been playing for six years.

I was full of myself, Golf was obviously a natural game to me and my intentions were to continue playing, which I did.
It was then I made my mistake. I went straight down to the Bookshop, got a book about it plus a couple of Magazines from the Stationer’s.

Oh my goodness, upon reading it I wasn’t holding the Club correctly, my feet were wrong for each individual Club and I wasn’t bending my knees right etc.
Before my second game some two weeks later I’d been out, brought a Glove, a pair of Golfing Shoes and even a Hat!

The next game, using all the techniques I had been learning, I went round in 136. In fact it took me a year and a half and some 50 games to get back to under 100.

So summing up, I learnt something and it’s something I’ve carried through my life which is basically and use for so many things, don’t go over technical too soon, never lose that freshness, natural ability. As long as the job is being done, stick to it. Some may use the phrase “If it’s not broken, don’t fix it”.

I often see this with people starting out with Chicken Keeping or Vegetable Gardening.

In Chicken Keeping it’s a case of buying a Coop, fixing a Run, giving them space to sleep and lay, something to eat out of and drink out of. After that it’s feeding them, cleaning them and keeping an eye on them. It’s all pretty simple really. BUT, make sure they’re safe, that’s paramount!

With Vegetable Gardening, my first year was digging up about 8 feet x 6 feet of Turf, sowing some Runner Beans and Onions and off I went, they grew well and tasted good.

Success in almost anything we do is usually down to enthusiasm and motivation. For my John O’Groats to Land’s End solo cycle trip I just cycled as normal beforehand, no Gym visiting, calculating calories etc. It was just a case of taking the bike up to Scotland, getting on it and peddle! Fair enough I had no time limits like many who work full time would have, but I achieved my goal with no sprains or strains, totally enjoyed it.

Books, Magazines, Videos on subjects are great but at the end of the day it’s down to actually doing it and all too often or not doing it your way. Reading and viewing them slowly but surely is key.
Learn as you go and if time is not a major factor in anything you will succeed without spending a fortune.

As you can see, I believe in the simple life and simple ways, uncomplicate things. I’ve come unstuck on many an occasion, but all the better for it!
Luckily, not everyone does it my way!