Another field bites the dust !

« Previous: Back to the Woods
Next:Chickens are not just for Lockdown »

To me it’s like one of those Horror films where you see some awful thing slowly creeping along devouring all that’s before it.

I moved from Ashford in Kent to Bishop’s Waltham in Hampshire nearly three years ago. Although I miss Kent very much, I haven’t missed the Housing Developments which over a number of years saw the countryside being eaten up by new housing, business parks and preparation developments for Brexit.

For the first 18 months in my new locale nothing much happened in the new build sense, then 2020 saw four sites being developed, all fields to the south side, luckily the north side is protected by the South Downs National Park
The sad news is that all the sites are on the border of the countryside hence making a walk to greenery a few hundred meters more than before. 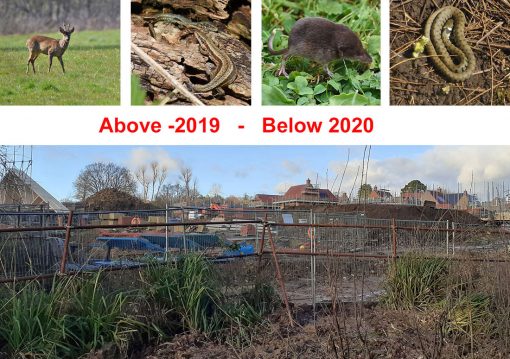 The above development started some month’s back and is now half complete. Beforehand they put up a Plastic Repile fence around the whole field. Is doing this to keep them in or keep them out ? Fair enough to keep them out, but keeping them in is just condemning them to almost certain death !
At the bottom of the bank there was a pond (foreground), this housed the Lizards and numerous birds, now it is simply mud, rubble and empty bags of crisps and other such things.

I don’t blame those wishing to move to the country, but most new housing developments seem to not take much notice of environment in the form of preservation of wildlife.
To build 100 houses which would say house 300 people is killing thousands of wild residents who lived there before.

The Governments new shortcuts on building seems to have led to the “There’s a field, lets buy and build”.