Eden – An adventure into Reality TV

The Recipe..
Take Castaway, Big Brother, Survivors, I’m a Celebrity Get me out of here, The Island, mix them in a bowl.
Add some hanky panky, personality traits of persons mainly under the age of 35
and you get a TV Show !! 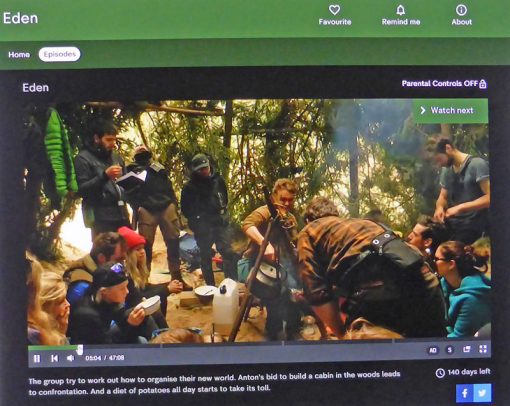 The concept of the Programme is great, 23 people left alone in a remote location and after a wee bit of starting help, left alone to fend for themselves for a year.
Why 23 I’m unsure of, most successful ‘gatherings’ are around the 11 or 12 mark, like most Sporting Teams, even the Disciples!

I would guess that some won’t make the 12 months, so this may be accounted for plus, if like ‘I’m a Celebrity’, they don’t want newcomers coming in half way through.

This of course is written after watching the first two episodes, but even from the very first scene and watching the people coming in, you knew straight away it would not be long before more intimate relationships would happen which in turn would make it slightly soapy and give viewers more of a reason to watch.
Thus far though, it’s quite well balanced and after all, these things are sure to happen. We await the first fisticuffs !

The Team were selected for their professions and talents. It does make you wonder why a man who is a Fishing Instructor should take five weeks before he catches his first fish!

The player with the most watchability and probably the one viewers will have a love / hate relationship is Anton, the Adventurer and self-confessed loner. Football Fans may realte to him, oth in looks and attitude (on the pitch) to Zlatan Ibrahimovic, or going back a few years to ‘Wolf’ in the TV series ‘Gladiators’ !
To be fair, he has some pretty good ideas, just a communication problem. 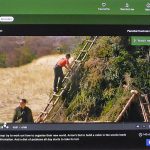 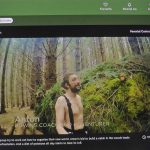 One thing that stands out is each individual’s lack of preparation and knowledge. Surely, for the location and time spent there you’d do a bit of research beforehand. Some obviously had and it’s those who will shine through, probably more as background to the soapy issues which are obviously going to become more as the series goes on.

Selection for this challenging documentary series has been quite good, you have a Doctor, Vet, Carpenter, ex-Soldier etc. but it’s always at the back of your mind as to dig deeper into why they are doing it. Is it for future development of themselves or is it that some may, like the Apprentice and other similar programmes, become future Career TV Presenters!

Maybe I’m being finnickly and writing slightly tongue in cheek, it’s my kind of TV, it sends out a message of frugality, self-sufficiency and what would happen if there was a catastrophic Global Virus and some escaped to live like this.

It will take a lot to beat Castaway, the pioneer TV Show which set off all these by products.

Thus far I’m enjoying it and I’m pretty sure that those who’ve started to watch will continue to do so and after chatting about it over lunch breaks around the Country, more viewers will come in to watch.

Good luck to them!

To watch series to date go Channel4 Catch Up

One Comment on “Eden – An adventure into Reality TV”

This sort of reality-type TV programme is why, when moving house in 2014, I opted not to have a TV set at all because I just can not see the sense or any enjoyment in watching such a load of utter trash. Until my daughter and son-in-law bought me a TV set for Christmas 2016 so that I could catch up on my US crime programmes on the box I was living quite happily without my daily dose of celebrity tripe in my living room.