I sincerely believe that when ‘Someone’ designed evolution, they had a somewhat strange sense of humour.
Although it is said that us human beings came last, wouldn’t it have been nice to make us a bit more immune to at least some creatures which make about 80% of us suffer on nice summer days? 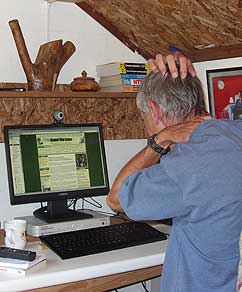 It seems that every time I poke my nose out the door, some insect or other see’s me as an ideal resting place for the rest of the day.
You don’t always feel them at first. I walk around doing a bit of weeding and tidying up, great, then as soon as I sit down to do anything, the itching starts.

Luck would have it that most of these homeless insects are hardly the size to see with the naked eye. The itch can be on the wrist, but by the time you’ve felt that, the fly is half way up your arm, especially thunderflies and mites.

Wasps I don’t have too much of a problem with. At least you see it coming and can run, duck and dive accordingly, even although it simply follows you. If you’d have kept still, it would have found you boring and gone away.
They’re more of a problem in the House. You see the wasp going around and after vain attempts to force it out the window, decide to take the Towel option at great speed.
Then, whack, it’s gone, great, but you don’t know where. You spend the next ten minutes looking at your head from all different angles, down your back, up your trouser legs in the fear it may be crawling somewhere you don’t know about.

After you’ve showered for the fifth time of the day, you go up to your bedroom to find that someone’s kindly not pulled the curtains, shut the window nor turned off the light. You glance knowingly at the ceiling and there they are, hundreds, maybe thousands of these tiny black flies walking accross your ceiling like an ancient Army.
You then have to make a decision; you can go to bed and wait for them to drop from the ceiling onto you and your bed, try and wipe them all out, or sleep in another room.

Worse is often yet to come. You sort it all out, go to bed and get ready for sleep only to be kept awake by the mosquito buzzing around the room, sometimes with the occasional landing on your face. Back out of bed, find a magazine or T-Shirt and sure enough, the thing’s settled somewhere and you don’t know where.
Whilst you’re waiting it to emerge, a few rogue escapee flies of your previous demolition job have gathered around the light bulb, so you go for those instead only to find the Mosquito buzzing returns.

Eventually, sleep wins the day and you wake up the following morning full of the pleasures of a fine English Summers Day, go to the Bathroom, look in the Mirror and find yourself covered from head to toe with large red Insect bites, probably a selection of about six species.

I have to admit I’m quite glad when Autumn comes around, but that’s when the Cat starts scratching !