JOGLE One year on 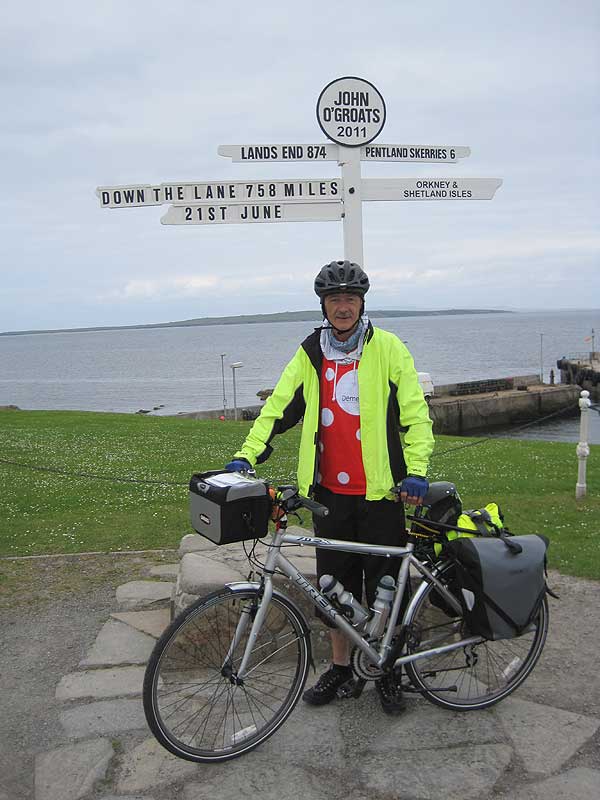 There has not been one day in the last 343 when I haven’t thought about something to do with the adventure, about 98% of them good and the other 2% not so good, those being the the two days where I thought both mind and body were going to succumb to age and getting very wet !!

Many people have asked why I did it alone and my answer is always “I had to”. For me it had to be personal, a chance for me to be with me, think about things, put certain parts of my life into perspective and I guess to prepare myself to the fact I’m not getting any younger.

I’m so glad I did it ‘my way’, I could go at a speed I wanted to, I could stop where I wanted to and I had only myself to blame when I made a wrong decision in anything (like being stopped by the Police, thankfully, for cycling down the slip road on to the M74 in Scotland!!).

The strange thing is I actually found it easier than I thought. My training beforehand was almost non-existent, a maximum of 18 miles 3 or 4 times a week, I’d never cycled more than 25 miles in a day, so I think if I had a brain, I’d have never thought it possible!
I managed between 32 and 66 miles a day and as I said there were only two days when I have to say I was completely miserable due mainly to weather combined with very tired limbs, well the whole body really!

But those days are so excelled by the good ones, I met some friends along the way staying in Dumbarton with Alex and Annie from the Forum, meeting Mo, Mr.Mo, Bollybarb in Cheshire then Ock, Mrs Ock and SunnyB at the finishing post in Land’s End and enjoying their company for the night before returning home.

For me the most ‘spiritual’ part of the trip was on top of Glencoe. I’d been reading about the climb from Ballacluish to the top and had resorted myself to walking at least some of the way up it, but it was like someone was pushing me, I sailed up there.
When at the Summit I found a little spot and sat down for a while. Within seconds I have to say I was crying my eyes out, I stopped and although I knew she wasn’t there in person, I felt the presence of my daughter Louise who we lost to a Motorbike accident some years ago.
I can’t really describe the feeling but it was one of complete calm, peace and in some ways I believe that was a part of the reason for the ride itself, just to experience exactly what I did.
She is never out of my thoughts, but for the following 17 days, she was riding along next to me.

After that i never had a doubt I wouldn’t finish, it was a case of getting up, big cooked breakfast, cycling about 6 hours at my own pace and spending a few hours each evening exploring the vicinity of the B&B I was at.

By Day 20 I didn’t want it to finish and even when I crossed the line at Land’s End I truly believed I could turn the bike around and go back again!

So, for no matter what reason, if there is anyone reading this who has considered doing this – DO IT! Whether you see it as a challenge, a search, a holiday or just a bike ride, it’s great.
You will meet people along the way who will make you re-assess your life maybe, like the 78 and 76 year old’s doing it on a Tandem and the many people cruising around on their Harley Davidson’s, the people living in Barges along the Canals, so many who have either changed their life or are living it to the full.

Would I do it again, no, I’ve done it, there are other things to be done before that man wearing the black cloak holding a Scythe comes along – and when he does I want to be able to say…Fair enough Mate, I’ve done as best and as much as I can.

You can read the Diary, view the route and Stats in the Down the Lane John O’Groats to Land’s End pages.

2 Comments on “JOGLE One year on”

Wow – what a fabulous experience! I’m a fellow JOGLE’er – having taken part in a charity road rally a few years ago (two days to get from the top to the bottom using almost no motorway, and having to solve clues and check-in at each stage checkpoint along the way) and I can honestly say it’s one of the best things I ever did – the feeling as you pull up at LE – well, fantastic doesn’t sum it up! Well done you though, a far tougher way of dealing with it, yours!

Well done to you as well Robyn, thank you for your kind comment. Richard