In this new TV Documentary series, part-time Vicar, Peter Owen Jones shows us his quest to live and survive on what amounts to zero money. 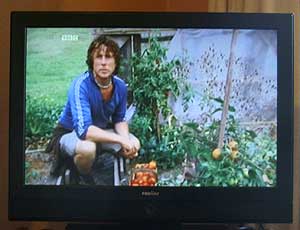 First it has to be said that with his job he gets a free house (grossly too big for one person) and being a ‘village hopping Vicar’ in West Sussex which obviously makes him a fairly central person to communities does afford him a pretty good start, but his concept and experiences can certainly be taken up and learnt from.

The basic idea seems to be that rather than actual cash money, he receives payment from his ‘customers’ in kind, a bartering system which supplies his material needs such as food and other expenses. One assumes his Council Tax etc. is paid for by the Church.
He is also lucky enough to have free use of a walled Vegetable Garden in a local Manor House and his car expenses are given to him by his Parish members.

Throughout the programme Peter refers to the ways of St. Francis of Assisi (good bloke) with phrases such as ‘poverty brings meaning’, ‘take only what is necessary’ and on once being an Advertising Executive, he refers to how St. Francis himself was once a ‘playboy’, although I’m unsure where he got that information from!
Of course, a big argument could be that back in those days there weren’t Mobile Phones, Plasma TV’s, Cars and Supermarkets selling convenience food etc., but all in all, you can see where he’s coming from and it all seems to make a lot of sense.

In some ways I see myself in this programme. I too have a part-time job and rely on oddjobs such as decorating, gardening and anything else to make ends meet. It is a simpler life, you are your own destiny, but it’s not always easy! The difference is that I need the money as in cash, I pay rent and taxes and as much as I’d like to, without becoming a drop out, I have no other option – maybe one day!’

One other sentence he came up with of interest was that he and others are ‘looking to find home’ and indeed, from the point that we are only here for a very short space of time, we need to get it as right as we can and live in our own comfort zone whether that be a wealthy one or not.
This maybe is the most important part of the programme, being a Vicar, he can bring more the spiritual issues of our mind to the fore whether they be religious or not.
Certainly all the Villagers seem on his side and it does show that if we really want to we can bring back some of those community values we seemed to leave behind during the 1960’s, 70’s and 80’s.

You can easily see some glimpses of the original River Cottage series, but what this one adds is that it’s not self-sufficiency, it’s leading a simpler lifestyle to bring more happiness into your life.

What I’ve found in my quest for a simpler life is that it’s hard work and you need a lot of understanding and generous people around you. Luckily both he and myself seem to be in that position. I wish the Vicar well and look forward to seeing the rest of the series.