Before I carry on I should say that being a Senior isn’t always much fun. In the last two month’s I have been asked by the girl in the Optician if I was over 70 and whilst having a tour of Dover Castle War Tunnels, the Guide picked me out from 30 people and asked “Are you alright doing Stairs Sir”.
So, already you can see this getting older thing bugs me somewhat. 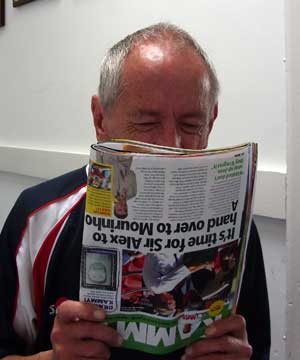 Now, on the books. Many Bookshops have books called things like “Learning PC for seniors” and “Seniors PC, a guide for the over 60’s” etc.
Well having done extensive research on these books I have found them to be exactly the same as ordinary ‘Learn PC’ books, but the type is bigger!

Learning to use your new PC is simple

Learning to use your PC is simple

It was really pleasing to hear a chap being interviewed on Radio Kent a few weeks back.
The man had taken PC lessons at the age of 96, never had a PC before.
His best remark of all was that where he explained that it was all quite easy except ordering his Tesco Shopping which he found a bit confusing at first!

I’m only 62 but have to admit that things aren’t all they could be on the memory side, but this is natural progression of age and not something saying you’re a complete has been and gone off your rocker!
Long term memory is great, you can remember the names of all your School mates, but forget the name of a big film actor who was on a chat show two hours ago. So be it.

Also, why should all over 60’s be known as ‘love’ or ‘dear’, they aren’t my love nor are they necessarily dear to them and vice versa. ‘Sir’ or ‘Madam’ is a lot better.
Not only do they call you those, but they shout as well. They wonder why you haven’t taken any notice of them but don’t realise that because of the shouting, they’re speaking to someone behind you.

One thing is for certain though, we can’t turn back the clock. You get used to going to Specsavers and hearing that one eye’s got slightly worse, the other, a lot and the cateracts are coming along quite nicely. You get used to knowing where evry Public Convenience is between Ashford and Southampton and in the town centres you frequent.

Sure we’re starting to get on, Lord knows what it’ll be like at 70, touch wood of course, but don’t see us as purchasing a one way ticket to the Knackers Yard just yet – please !