« Previous: Scouting gets tougher ?
Next:Banks – a change for the better »

Once upon a time, not so long ago, Michael Portillo was best known for being a rather suave debinair Member of Parliament and a strong allie of the then Prime Minister Margaret Thatcher. Upon being a close third place in the Leadership Election following John Majors term of Office and a loss in the General Election, he hung up his House of Commons slippers and embarked on his own career mainly in the Media.

Outside of his regular spot on the Politics Show, he once did a documentary ‘Portillo the single Mum’ where he spent time with a single Mum in her home struggling to make ends meet. The result of that programme produced a man of understanding and compassion, plus a far better understanding of frugality and thriftiness.

After that he travelled through his birthland Spain in ‘Great Train Journeys’ and again there were signs of an emotional man who respected his history and the heritage of things around him. 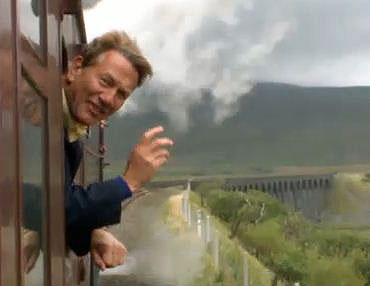 Starting last week, the BBC have produced a little gem of a programme where Portillo travels certain routes of Britain’s Railways along with his ‘Bradshaws Guide’ a very early combination of railway timetable and tourist guide.
What we get from this is splendid, a chance to visit small towns, countryside and short sincere interviews with people who live and work there.
It’s a delight to see the condition of some of the Railway Stations he has stopped at and the pride the Staff have for them.

The series is not solely about Railway, it’s about why it is there and the history surrounding the links from one City or Town to the next. We’ve had vegetable growing, chicken keepers, Butchers, Bakers and Candlestick Makers – it really is typical Britain, something so many of us thought had gone and we don’t know it’s still there because we have lost that will to look out a window and ask ourselves “Why” more often.

After Michael Portillo’s political career ended, he was asked what was his greatest achievement in Politics. Without hesitation it was the high role and ultimate responsibility of saving the beautiful Settle to Carlisle Railway when he was Transport Minister. That is not the normal reply of a Political person!

Last night he re-visited that railway line and met some of the people he campaigned alongside. He reminisced the fact that the best way forward to save the line was to make people use it and that they did between them, the cost of repairing the line (the reason for it’s pending closure) was found to be drastically over estimated, the appeal to keep it open was rejected in the Commons and the last hope was for him to ‘advise’ Thatcher she should not sign the go ahead – she didn’t and we still have 60 odd miles of some of the most beautiful railway in Europe and and icon amongst rail enthusiasts.

All through the series so far, Michael Portillo has shown us to be a sincere believer in the Railway, but more importantly he flies the flag for keeping our heritage in place, because that is what separates us from many. The railway and society are side by side, always was and always will be – as long as we use them and protect them.

Finally, the look on his face and the words from his mouth as he saw the Steam Train approaching was one to behold. I do believe there is a bit of a ‘geek’ in him as well !!
I have a feeling about fate and I wonder if, when his Political Career as a Politician came to an abrupt end, he found ‘his quest’.

I have really enjoyed this series, especially his visits to Totnes, Todmorden and Bournville. If only there was more TV like this, interesting, informative and nice and slowly paced.