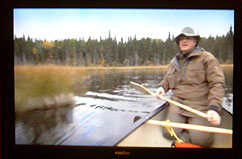 To many viewers, Ray Mears is a ‘blokes bloke’, a somewhat macho Guy going around telling us how to survive in Antartica or somewhere, you know, somewhere we’re never likely to go to etc., but underneath that is the fact he is top of the trade in survival techniques, saying himself “Knowledge is the key to survival and the best thing about that is; it doesn’t weigh anything.”

His credencials are second to none. As a young boy (born 1964), he started learning about the outdoor life on the North Downs learning to track foxes and without sufficient money to afford camping out, built Bivvi’s instead! Through sheer enthusiasm and love of the subject, his knowledge grew and grew.
In 1983, he opened the ‘Woodlore School of Wilderness Bushcraft’. His expertise for wildlife, the outdoors and the ability to do anything from building a plate holder from wood to making a Canoe soon got round and in 1992 he started filming with the BBC ‘Tracks’ Team. 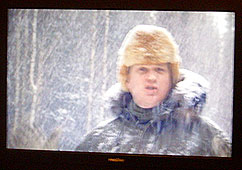 The BBC, knowing that he really did do what he said on the tin, rather than someone who knew a bit, but had good TV presence, gave him his first solo series in 2003.

Previous series have maybe been a bit on the MAN against the elements and probably magnetized viewers made up of older ex-Scout Leaders, Company types who do their Team Bonding exercises in the Lake District and those who walk Blackheath Common on a regular basis.

But watching the first episode of Northern Frontier changed it from macho to magic. We are now blessed with an hour long programme where on his epic journey through Canada, he meets local folk to learn their craftsmanship, skills and culture, a fine combination of characters and personalities.
What really came over in the first episode was how helpless we humans really are! Well, it’s true.


A Squirrel can be born and with no training or learning at all, build his own house, work out the date when to start building it for the forthcoming seasonal change and store sufficient food to see him through to Spring!
It takes us probably 20 odd years, education, Courses and anything else to reach that standard – and that’s not in a climate where temperatures reach minus 40 degrees!

Beautifully filmed in true BBC fashion we saw him making a Bivvi in Summer and setting up camp in Winter with some tips which are even relevant to us! ie. In the cold, work slowly. If you build up a sweat you become damp and will suffer when evening comes and it gets cooler.

No matter what age or gender you may be, there will be something in this series which will either be of some relevance or just a better understanding of our environment and how we can not only try to save it, but to maintain it for future generations.

That’s what I got out of last night. Although it wasn’t said, it showed to me that we are mere custodians of this Planet for the short amount of time we are on it. What we choose to do to anything will effect the future in one way or the other. It’s our responsibility to leave a place how we found it, if not better.

Let’s hope we are never forced to need some of the survival techniques he teaches us, but knowledge of them can’t do us any harm !

Super Television for sure.

I must admit that I like to watch these type of programs, too. Some would find that strange for a female. But, having been a girl scout myself, the interest in all those natural survival skills has not deminished over the years, infact it seems far more important to me now as I get older. And I do agree with your sentiment; `Lets hope we are never forced to need some of these techniques, but knowledge of them can`t do us any harm’.