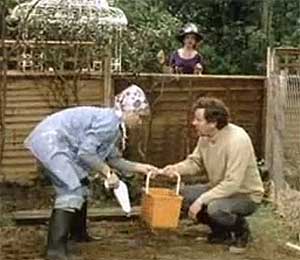 The passing away of Richard Briers this week is a sad loss to the World of Stage and small screen.

He will be remembered for many Plays and Comedy Series from Shakespeare to Ever Decreasing Circles,
he played parts to appeal to almost any taste, but without doubt the one programme he will be
remembered for the most is his portrayal of Tom Good in ‘The Good Life’, a series about a couple
living in middle to upper class suburbia who throw in the day job to become self-sufficient.

Up until that series self-sufficiency was not really heard of much, you had Gardeners World and
that was that, no one really thought about actually doing it, maybe in the Country with a
smallholding, but definity not in the residential areas of up market towns.

I titled this ‘Sowing Seeds’ because I believe that programme did sow seeds for many people, it
made people look at their lifes and the alternatives.

I remember the series well, watched everyone of them and the talk in the Office the following day
was always along the lines of how you could, or couldn’t do as they were. 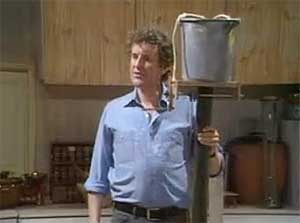 Up until then life was very much 9 to 5, or at least career orientated, you left School, got a job
and that was more or less it until you retired at 65.
This programme challenged that and through it’s comedy thre out some serious messages, I wonder if
that time the Producers and Actors knew they could be starting a revolution of Downshifting!!

The one programme in the series which remains in my memory the most is where Barbara really wanted a nice Frock and unknown to her Tom went out and did some freelance work to buy it for her. It said a
story which I’ve kind of taken it upon myself to pass on to others who are considering downshifting
and that is ‘the whole family must be a part of it’, it cannot be ‘my decision’, it has to be a
family one, they always come first and if that means a few adaptions along the way so be it. After
all, they are the ones who make as much or even more sacrifice than yourself.

So, the seeds were sown and now they’re blossoming, more and more people are searching out for a
different and alternative lifestyle, not so much an easier one, but one where they can be the
Master of their own destiny, one where they are self reliant, one where they can experience a
simpler life, but most of all, a happier one and hopefully leaving a legacy behind them.

Good for Richard Briars, although perhaps just the Actor who played the role written by someone
else, but an Actor who you believed, saw your inner self with and made the part a happy one.

He was good and mighty talented bloke.