The beauty of old Rayburn’s

You will see from the photograph of my Rayburn that it’s a bit worse for wear, but consider the fact it’s the same age as me (built c.1948) and has been just as battered around by life as myself, it’s not bad.

Not only all of that, it heats the Kitchen and Sitting Room all on it’s own!

The main thing is, it does the job – and pretty darned well to boot ! 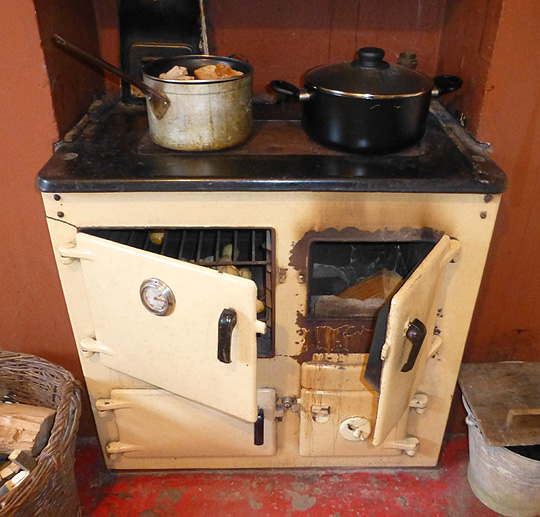 Our Rayburn is inherited, the Landlord put it in when brand new and has about 5 previous owners.

Nowadays there are of course much more streamlined editions and although they do just as good as job, the Aga is still ‘the posh one’ all be it that most who can afford either seldom have solid fuel, they go for Gas (the easy man’s Cooker!!!).

We use ours mainly as a supplement to an Electric Oven. Because we never fuel it to the brim and have it going really hot, it’s used mainly for slow cooking such as Soups, Casseroles, slowly cooking up Chicken Mash and the oven part used to roast egg shells to crunch up and give back to the Chickens a Grit.

Being frugally minded (some say mean!) I can keep it going all day and night using the following methods..
About 4 – 5pm through late Autumn to early Spring I will base it with 30 to 35 lumps of Taybrite solid fuel then keep it going all night with a couple of logs acquired from the woods down the Lane. Then in the morning I will lightly rake it, out another log on with about 10 lumps of Taybrite. During the day it doesn’t get hot but is sufficient to keep the Kitchen warm and slow cook (very slow cook!!).

There’s a perception that modern things to do with household are better, but with my Rayburn, by simply living more how we lived back in the 50’s and early 60’s it is better than modern. As they say ‘it does what it says on the tin’ and I wonder how many modern items such as Electric Kettles, Toasters and more would last 65 years and still do the job they’re supposed.