The Edible Garden Show is really what it say’s on the tin, a huge Exhibition showing what can be produced by almost anyone in their Garden or Allotment from basic Vegetable Growing, Poultry keeping to actually cooking it.

For it’s first three years the Show took place in Stoneleigh, Warwickshire, but with numbers of visitors growing rapidly, this year it moved to the grandeur of Alexandra Palace in North London, the birthplace of BBC Radio.

Neatly set in the great Hall were a plethora of Stands displaying selling Country Organic Food Products, just about everything for the Vegetable Gardener to home Poultry Keeping.
It was good to see so many of which were up and coming small business’s.

I went on the first day and to my surprise, as I walked through the entrance door, The Prince of Wales with Camilla walked straight past me going out. I did notice that one Stand was selling ‘Duchy’ products – maybe he was checking out sales !
But to have such high ranking visitors just underlined the growing enthusiasm for growing your own, being more self reliant and basically, knowing where your food came from (it’s a good hobby as well of course!).

There were also ongoing talks by guest Speakers such as James Wong, Pippa Greenwood, Christine Walkden and Cookery with James Vickory.

A highlight for me was, for the first time, to meet my buddy Sean James Cameron of the HorticulturalChannelTV; we’ve messaged, emailed and skyped but never met face to face.
James had his Stand pretty central in the Hall which showed a pleasantly neat and simple to the eye set up of an Allotment. For me this summed up what garden or allotment farming is all about – no complications, treat the soil and vegetables growing with respect and they’ll respect you back with bountiful harvests.
The Stand was applauded by all. 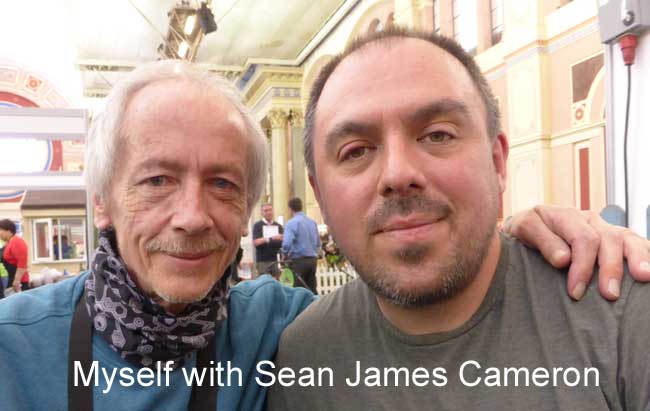 All in all a well worth while day out and from the conversations I overheard, the Show was yet again a success.

For the next Edible Garden Show Info and Dates, see their Web Site HERE

I’ll be there anyway!

Whilst you’re here have a look round the main Down the Lane Web Site!