« Previous: Ex-Pats struggling with Credit Crunch
Next:Frugal is not tight ! »

It sounds like Kids talking to each other doesn’t, “I bet I can do it a million million times”. Yet those sorts of sayings are just becoming a normal reality in the National and World Markets. Nearly 2 trillion pounds to bail out the Banks last October – blimey. 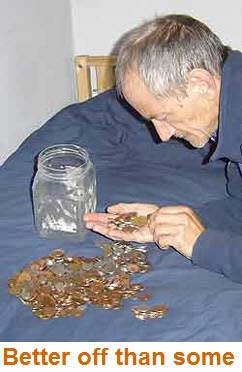 What I really want to know is who actually owns these trillions of pounds we keep borrowing? It’s not only us, loads of Countries are doing it – so who is it who has all this dosh ?

Is there some James Bond character sitting in an Island Fortress somewhere with thousands of gold bars stacked up in an underground Cavern?

If we are borrowing all this money, does this Bloke, or Woman come to that, know that they have about as much chance of getting it back as David Beckham scoring the winning goal in the 2058 World Cup Final, Mmmm, there again, bit of Surgery………..!

And, let’s say there are around 40 million people in the UK over the age of 18. So why not give the nigh on Â£2,000,000,000,000 to them. That would work out to approximately Â£50,000 each. We could then make our own investments, spend loads of money and get the economy going again.
Not only that, but every home in the Country could then have a 42″ Plasma, Wii and a Mobile Phone for every room. Makes sense to me.

The other thing I want to know is, they say that every Country is losing billions of pounds a year. So where’s it going? I can only think it’s going to this Bloke with the Island, then, what’s he doing with it. Blimey, I could live well on 30 grand a year, so why does he want all that money. He can’t spend it, so he may as well just give it back.

You see, if it’s not going to him, is there a giant hole somewhere where someone throws all the Money we’ve lost into?

These are very serious questions indeed and I’m surprised the likes of The Times, The Telegraph and other broadsheets don’t spend more time investigating it. If I was Chief Editor, I’d be more interested to know that than who was at Royal Ascot the day previous.

All this only leads me to believe that many of those up there have lost touch. To them, playing around with a few billion is nothing, yet the likes of you and I who genuinely go for help because we can’t afford the Electricity Bill are looked upon as overspending irresponsible people, a 60k file in the Database and for some reason unbeknown to all, the reason for all this.

Maybe for the last 25 years or so, we’ve had it too good – or have we had it too easy – too easy to borrow. But it seems we’re only following the powers to be ways !

3 Comments on “Trillions of pounds”

I share your thoughts completely – where does all that money come from and go to? I often ask my hubby (who I still feel is far better educated than me and therefore must know the answers to all my weird and wonderful questions), do dealers just deal with make-believe figures on their screen? Obviously money must have changed hands at one time, but I mean if all the humans in the world who are lucky enough to have shares/savings and whatnot actually asked for their money back in ready cash, would there be enough actual money to pay everyone? Now I’ve got myself thinking again!

Love reading your blog entries, love the website too.

All the answers to your questions at

Quite long, but simply the most honest and factual guide I have found, to what has gone wrong in the world for the last 3 decades.It certainly opened my eyes.
Now looking for like minded people to form a self sufficient community preferably somewhere in Surrey.

Where does all the money come from? Why, it all comes from what the govt call “financial easement”.
“Financial easement” is what ordinary straight speaking folk call ‘printing more money’. It’s a very bad idea – and if you want proof then have a look at the value of the Zimbabwean dollar.

BTW, guess which country prints the paper money for Zimbabwe? Yup, it’s us.