and how I can’t master it!

They said that the new Digital TV System is great, it will revolutionise home entertainment and take us firmly into the 21st. Century.

Well I have to say that much of that statement is true; we have a huge range of Channels to choose from, far better pictures, better sound, the ability to play games, plug our Laptop in, extra space because of the new slimline models, what else do we need?

1. We need a Zapper which we can understand, emphasis on a Zapper and not three or four.
In fact, was it not easier to say “Turn it over to ITV” than “I think it’s on TV Guide > Movies > 2nd page Dad”.
A Zapper where the ‘remind me’ button isn’t next to the info button and half way through a dramatic scene in a movie you get told to switch over because Lazy Town is about to start on CBBC.
Finally, one that is completely the opposite colour to all your furniture and fittings so you can find it and not try ringing someone up on it because it looks like a Mobile Phone.


2. A Box and TV combination where the sound of the person speaking does not arrive 2 seconds after the person has opened their mouth. Good ness knows what a documentary about voice throwing would come out like!

3. An Entertainment system where there are not 200 cables squeezed down the back of the curtain. This leads to when you buy a new Accessory not being able to decipher which of the cables is the old one, so you just take the plugs out, leave it and you’re up to 201 cables.

Then there’s the outside of the house. A fine row of Victorian or Edwardian Houses with everyone sporting a different colour / different shape Satellite Dish. Fair enough the old aerials were an eyesore, but now we have to have both because some digital comes through one and Analogue comes through the other. Our houses are becoming homes the other side of the technical bits! 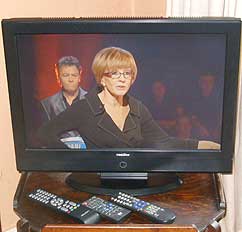 Like the Mobile Phone, it is hard to imagine life without one. We have now become a society where to get up and switch a TV Channel over manually would be such a bind and even to think we are overstated with just four Channels – oh what disaster!

Thank heavens that someone has now decided we can purchase Televisions which have Freesat, Freeview inside them without the need for extra boxes and cables, but interesting to note that these come out not long after we have taken out a small Mortgage to buy the one’s without that.

At least the clamber for buying the new forced upon us technology has brought competition into the market and prices are pretty good and I have to admit that my HD TV (also wired up to the Internet), DVD Player and Freesat Box serve me well – until I need Blu-Ray of course.

I love the new age technology, the diversity of choice and the clarity of picture etc. but I’m not 13 years old anymore and apparently that’s the age you need to be to actually work the things efficiently.

Oh how I love being miserable!