“Television programmes start in 15 minutes, better switch on the TV” was the near enough request from husband to wife when I were a wee lad back in the early, mid 1950’s.
It was nearing 6pm and the hour and a half Intermission was nearly at an end, that being the hour and a half when kids were kids, if it was dry you’d be in the Garden playing Cowboys and if it were wet, you’d be inside playing with your Meccano Set or Hornby Railway. 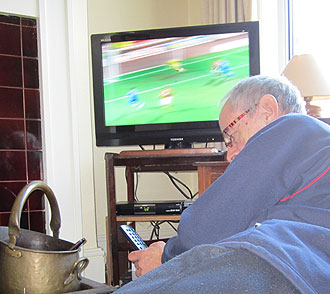 To avoid bad PC., I shall interject and say the girls would be outside playing Prams and inside with their Doll’s Houses!

But I digress, the meaning of this little moan is how technology has raced on with great infection, but maybe a little too quickly.

When my home first had a TV (to watch the Coronation in 1953), the reason for the 15 minutes was for the TV to warm up enough for you to see anything! On it would go, after about three minutes a star of light appeared in the middle of the screen and if you were lucky, this would suddenly expand to full size, all be it somewhat mis-shaped for a while.

Once every few weeks, nothing would happen, or you’d be half way through that live production of Tonight with Cliff Michelmore, there’d be a ‘phud’, a spark and possibly some smoke from somewhere amidst the enormity of the carcase (the screen was about 10″ wide and the cabinet about about 30″ wide, 36″ tall and20″ deep).
This was time for the TV Man to be called. Looking remarkably like Michael Palin in Monty Python’s ‘Bicycle Repair Man’, he would turn up with his Leather case full of tools when only one was needed and after said inspection would tell you what you already knew that one of the Valves had blown. Off he’d go to his Ford Prefect Van, return and repair. “See you in two weeks” was the usual sarcastic comment as he waved bye bye.

So you’d think that after 60 years or so TV’s would be pretty much sorted out. It seemed for quite a few years that they had, but along came digital and in the usual mad frantic rush to get something out as fast as possible, we seem to have fallen short on actually ensuring that most days the bloomin things actually work.

60 years on and here we are with lost pixels, automatic up-dates which put three new Channels on but seem to lose the other 469, poor reception because the Smith family at No.37 won’t cut back their Leylandi and the for no reason at all, no TV at all!

Then there’s the Broadband!

This can of course usually be rectified without having to call out TV Repair Man, we can now find a website on the Internet which is sure to help, better that than phoning and speaking to 8 recorded Robot messages before speaking to the human who more times than one is in the wrong department.

Even then, technology seems to have gone too quick. We’re half way through out Internet Search and the Broadband goes down. After the usual reboot of the Router, we can’t find where we were and because you turned the Router off, you’re only getting half the speed you were an hour ago.

So, are there any winners out of our torment with these modern ways? Yes, the Radio – I’ve rather grown into the Archers of late, but even Dale Farm has a facebook and twitter account now!

All in all I’m happy with the age I’ve lived in, I have much more than my Parents and Grandparents did in the way of material, I have the ease to get around more, see the world, greater opportunities to learn and not have my younger best years of a life interfered with by two World Conflicts – Even so, wish they’d sort out the TV !!