At the end of the line!

« Previous: Southampton back to the future
Next:Personal transport – where’s the winner! »

The photograph on the right is my serious look. Why? well, because I’m obiovuly doing something wrong. 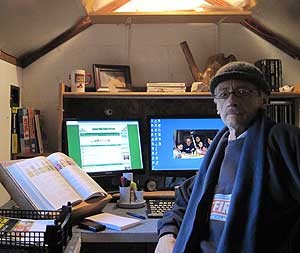 In the last six months, three people have guessed my age at being over 70, I know, hard to believe isn’t it!

The first was when we entertained the Pakistan Cricket Team at Canterbury last year. In my job as Dressing Room Attendant, you sometimes see Players two or three times a year and also, especially in the case of International players, once every other year or so.
The last time they came over we had a great time together as indeed we did this time as well, but one of their Players wandered down to my little Room to have a chat,”Oh Dicky, it is so nice to see you again, we haven’t been here for three years”, nice I thought, but then it continued, “You’ve been here a long time now, how old are you, must be about 75”.
Luckily I have a sense of humour, not about what was said, but how I reacted.
I guess it’s the difference of cultures, when I said I was only 62, he continued to say I looked older than that.
Oh well!

Next along was the old boy who often walks down the Lane, he’s a very likeable character and is only too keen to tell me a bit more history of the Lane and surrounding area.
So there we were chatting away and we got around to the post-war years. Out it came “I think it was about 1948, now I’m 82, so you’d probably be around about 10 by then wouldn’t you.
Quick calculations by my still relatively active brain made me 72 years old.
I pretended not to hear, but he probably thought I was deaf as well as him.

The final one came only last week. I was speaking to someone I used to know vaguely when I worked on the Railway. He asked me when I left so I said it was in 2000. Of course, I should have said I took early (very early) retirement, because the remark came back as “I’ve got to give it to you that you are still working at 75 Richard”.

I started this article saying I must be doing something wrong, but I guess that it may be more I’ve been doing something wrong. I spent many a year looking younger than I was, I had a brief spell of people guessing my actual age right when I was around the 50 – 57 mark, but now, it seems I’ve dropped out of estimations altogether.

I guess I could make this to my advantage and say I’ve left my Pension Book at home to get a few extra deals and to be fair, age can excuse you for certain things, so you don’t get called a Prat, you get called an old Prat instead, far more acceptable!

I shall just put it all down to my hectic lifestyle as an incredibly hard working person who stops at nothing to achieve what’s best for himself and others.
The teeth have gone, the body’s a wreck, but the soul is there and I’m liking it!

One thing is for certain and that’s I have no chance if I did have go to an interview for a full time job.

Finally, am I worried, have I gone into deep depression over this, will I never sleep the same in fear of tomorrow………NO !!!

One Comment on “At the end of the line!”

Hello there Richard – I have just come across the “Down the lane” web page whilst I was looking for info on keeping chickens. What a really lovely web site it is! It’s now listed in my favourites. My husband and I live in South Africa at the moment, but we will probably be back in the UK within the next few years. We would also like to “downshift” My husband is the same age as yourself and I think he will relate to your pages – once I get him onto the web site that is – He’s only just recently joined to 21st century by way of agreeing to use a cell phone! We lived in Kent when were last in the UK (2009) and loved it, so we will probably head back there. Anyway – thanks for a super site – its one I will visit regularly. – Regards. Angela.