« Previous: Driving Home
Next:Trying to do the norm »

I’ve been quite excited for some while to using my Forerunner GPS with the Bicycle. Work commitments at home haven’t allowed me to use it before coming to Southampton for a few days. 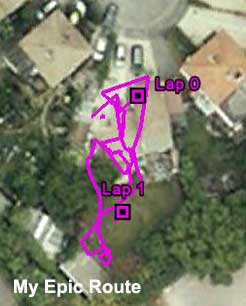 Knowing there’s a spare Bike down here, a good one at that – a Dawes, I brought it down to give it a go.

Now, as with all slightly tech gadgets, you are supplied with a 400 page manual which, after sorting out the language pages, narrows it down to around fifteen. Upon seeking these out, you find they are designed for those with good lateral thinking, but after some in depth perusal I felt ready to go.

All seemed relatively easy; switch on, switch to ‘Bike Mode’ and away you go.

I turned it on inside the house, did a few bits, went outside, got the bike out and just as I was about to set off, thought it was now time to push the ‘Start / Stop’ button.

Off I went on a good 12 mile ride with my daughter along roads, through woods, along the edge of Southampton Water and ending up back at Netley some 80 minutes later.

As soon as I stopped I pressed the ‘Start / Stop’ again to ensure I got all the timing right.

2. When I returned and pushed ‘stop’, I in fact started it again.

After plugging into my Laptop, I got the map on right. 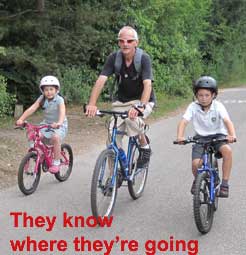 This map shows me efficiently walking from the Front Room Office, through to the back of the house closing a couple of doors on the way, walking down the garden, picking up the dogs toy three times to throw it up the garden, going into the shed and taking the bike around the side of the house to the road.
After that, a more or less repeat performance the other way round.

So my 15 mile bike ride became 0.09 miles at an average speed of 0.7mph and ascending a height of 7 feet.
My fastest speed was 1.6 which must have been when I tried to pick up the dog toy before he got to it.

After lessons learnt I have since just about got it right and tried it again when the Grandkids and myself had a little bike ride the following day.

Oh yes, my jaunt around the house before the cycle ride used up 2 calories apparently, so one small bite of a Flapjack should soon replenish my obvious health needs.

Summary – Do not switch on the GPS until you’re sitting on the Bike and ready to go. This may incur a few seconds waiting for it to pick up a satellite signal, but it is somewhat more efficient and won’t show you that quick trip to the bathroom before you start!. Also, leave anything with digital screens to people under the age of ten!