I don’t know what it is about two of my three Cats, but Mimi and Ginger seem to spend the whole summer and early Autumn quite happily sitting on the sofa or other places out of harms way. 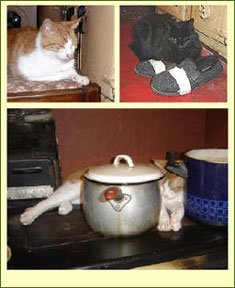 Then once you light the Rayburn about mid-end October, they have a sudden personality change which seems to last through to around the following April.

Ginger’s the worse. As soon as he senses or hears the Rayburn being lit, he’s in the kitchen, sitting by the soft top chair waiting for it to be moved no further away than half an inch from the front of the Rayburn.
He’ll even jump on it as you’re half way accross the kitchen floor with it.

Once on it, that’s it, day over, it’s get hot time. This usually results in him getting pretty freaked out by the heat and ends up either falling off the chair into the coal bucket, or the other side onto the food trays.

Mimi on the other hand prefers the floor, especially if there’s a pair of slippers which have been carefully and delicately repaired with Masking Tape.
She can’t take the heat too well and after about an hour strolls rather drunken like over the Bowls and wipes out a cereal bowl of water.
This in turn does not help her bladder and all you hear during the night is the Cat Flap going.

Big Ron on the other hand, at 1 stone 6 lbs, prefers the Greenhouse or the end of a bed set in a room which hasn’t had a heater on since we moved here in 1998.

Then you come down in the morning to find that Ginger has calculated heat to singe hair ratio and finished his night’s sleep on the hob part, see right! 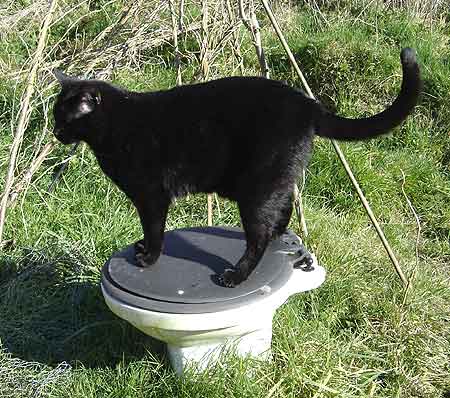 It doesn’t finish there. Cat’s seem to be partial to Coal and much prefer a Coal Stack to the common Litter Tray. Many’s a time when I’ve passed out half way through shovelling out the next three days worth. There’s something about that smell isn’t there !

Overall, they aren’t bad, but then comes the food. If I find the special offer is the food which nine out of every ten cats prefer, I find that all three of mine are the one’s out of ten, causing an extra visit to the Supermarket for their favourite (usually not on offer) and put the wasted one’s in the Cat’s Protection League Box.
At least it ends up in a good home I guess.

But Ron though prefers his food fresh, as in so fresh, it’s come straight off the fields around us. He enjoys a diverse diet of most creatures, but leaves the birds alone thank goodness – if he could speak he’d probably say, “Bird’s? No way Jose, don’t even touch the sides of your mouth”.

So I’ve concluded that cats are, in general, no good to anyone other than giving us humans a bit of a superiority complex. But even that’s banged on the head when you go up to stroke them and come away with five puncture marks in your fingers, just in the place you tap the keyboards !

I think I may come back as a Cat, but only if it guarantee’s a Rayburn !

4 Comments on “Cats, Rayburns and Food”

Richard why do you have a toilet in your garden? If it is for the cats then you will need to train them how to lift the lid!

Cor blimey, everyone knows they’re good to grow Lettuce in !!

PS – Potatoes don’t do so well in a Bath though.

Oh dear, I don’t have any heating in my house, I give my three cats a hotwater bottle each, you should see them struggle about with it on their back, ha ha