« Previous: Nature is bigger than us!
Next:TV Technology »

It was just another day really, I woke up (thank goodness), the sun was shining so I thought a perfect morning to get on and do some urgent gardening jobs. 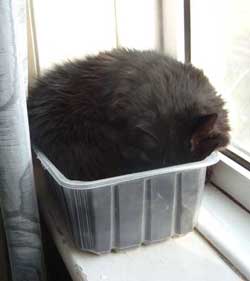 I had a quick peep around the vegetable patch and drew out my plan. This started with checking up on the seedlings on the window sill. Owing to the positioning etc. thought I’d have a little change round and went about doing so – until I was disturbed by that awkward time phone call.

All OK and off I went into the Garden. Being a nice chap and thinking they would help out a bit with the weeding, I let the Chickens out.
I went back into the house to fetch my gloves and realised I’d just walked over one of the cats breakfast. I regret to say, it was the breakfast he or she had eaten earlier on I walked into.

Blimey, forgot the seedlings are all open on the window sill. Result = Photo top right!

After that it was all pretty plain sailing really. Whilst one chicken was dust bathing in one Greenhouse, one of the other two had successfully trapped itself behind the Flower Pots in the other, where the third one was I didn’t know, but was to later find out it had been in the Kitchen and I think, got through one or two cat biscuits by the look of it.

Time moved on and the dog next door started barking at one chicken this side of the fence. Needless to say the chicken couldn’t have cared less and just continued, as the dog did.
This came to an abrupt end when Ronny, our 1stone 6lbs sack of potatoes, got fed up with the noise and weighed in accross the garden at high speed scaling the chicken and almost giving the dog a coronary.
That sorted that one out anyway. Oh, the chicken still didn’t react!

By that time I had two chickens in one Greenhouse accompanied by Ginger the cat sitting on his cushion on top of the shelves and refusing to move because I wanted the tin of seeds behind him. 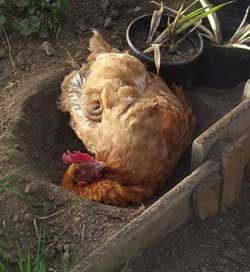 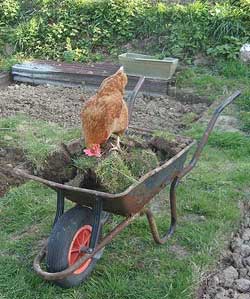 Anyway, in between all the goings on, I managed to dig a whole strip 8 feet x 1 feet. I mentally calculated that, at that rate, it would take me three weeks to dig the rest.
The turfs I had dug and piled into the wheelbarrow for distribution to the chicken run was hindered by one chicken constantly jumping on it even when I was moving it along.

Enough was enough, I got the chickens back in the run and rolled the lawnmower out of the shed, this is guaranteed to get at least Ginger back in the house at 10.02 seconds to the 100 meters. Ronny however doesn’t, he just makes himself a nest in the long grass and dozes off. Not only have I nearly had Chicken Pie for Supper when strimming in the past, I’ve nearly had Cat Pie as well!

Somehow I got my Beetroot seeds in, tidied up the outhouse and came back from behind the Barn with some reasonable compost. All was well, I covered the new seeds and let the chickens back out.

I sat down in ‘the Summerhouse’ and watched all the creatures roaming around in harmony. I then noticed two of the chickens were seemingly having a good meal under the hedge – ah, that’s where I thrwe the cats breakfast.

Not sure if I want an egg this morning!!