Days of future past

« Previous: The cost of lighting a Fire
Next:Walking the Chiwawa »

Days of future past is an Album made by the Moody Blues a long long time ago when I was young and the height of my fashion sense was earing bright scarlet Hipsters, white belt, flower shirt, head band and with an imaginary sign on my head saying “Prat” !
It’s an expression I use quite a lot, I don’t know why because like many Album titles back in the 1960’s, it doesn’t actually mean anything. Oh well. 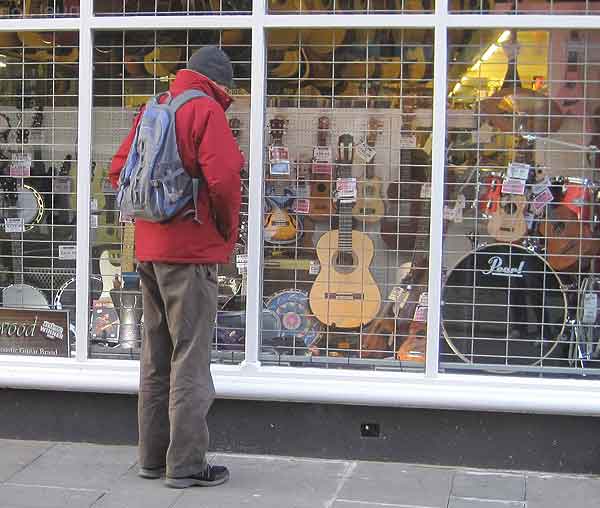 So there I was on a cold, damp January day in wind swept Hastings on a quest around second hand bookshops before making my way with son Leo to B & T Music to have out usual look round the Les Pauls and Stratocasters.

This regular visit does indeed stir up some memories for me; lunch hours in London spent looking around Music Instrument Stores in Shaftesbury Avenue in the vain hope you’d meet someone famous, but never did, but still trying out a few in the pretence you had the money to buy one if you wanted to.
A friend of mine who was a very good lead guitarist would try out a Les Paul for about thirty minutes before saying he didn’t like it and walked out.

Nowadays my son is a better guitarist than I ever was. I tell him it’s great but secretly I’m immensely jealous! In fact I brought my existing Guitar from B & T Music about 25 years ago and I brought Leo his first Guitar from there about 6 years ago. Like father, like son.

Looking in the window you can’t help but think ‘if only I’d tried harder’, ‘if I hadn’t spent Sunday afternoons swanning around talking to trees in Knole Park’ etc. but as always for a person of my age and at that time, I was happy enough to be able to play a guitar and tended to think the likes of Peter Green and Eric Clapton were born with a guitar in their hands and you’d never get that far anyway.

Nowadays I occasionally brush the dust off the frets and strum along to some old Zombies or Moody Blues number, but it doesn’t sound right, in fact it sounds so bad I feel like giving my Guitar away at the end of it. It would make a good Perch!