If you haven’t been to London for a while, there’s something going on! It seems that more and more people are using their bikes and in many cases, at both ends of their journies, but not the same bike!

Yesterday my son Leo and myself went up to the House of Commons and afterwards walked a large circle taking in Westminster, to Oxford Street to Soho and Trafalgar Square.
If we’d have done this a few years ago, we’d have probably forgotten that to cross a road we have to find some traffic lights and wait for the Red Man to turn Green. Nowadays, if you don’t, you could find yourself making more direct contact with a bicycle than you’d like!

Some are Tourists (if they dare!) and some just going about their business whatever that is. It would appear that most are personally owned bicycles, usually of lightweight build and ideal for darting in and out of traffic.

Even before our departure from Ashford International Rail Station, we notice the great increase in bicycles parked outside. The favourite nowadays seems to be cycling from your home to the Station, catching the train and when arriving in London, grab a ‘Boris Bike’ and get to work.

The Boris Bikes, sponsored by Barclays Bank, are an ideal solution to speed, healthier environment and if used effectively, saving you financially as well.

The system works in two stages; you purchase a ‘Access’, this allows you to hire one, you then pay for the time you wish to ride one.
With Bike Parks spread all over the City, you can hire one at Charing Cross, cycle to Oxford Street and leave it at a Bike Park there. After you have purchased the Access, the first 30 minutes cost you nothing and with Accesss being sold to you either on a daily, weekly or annual scale, it can work out very cheap. 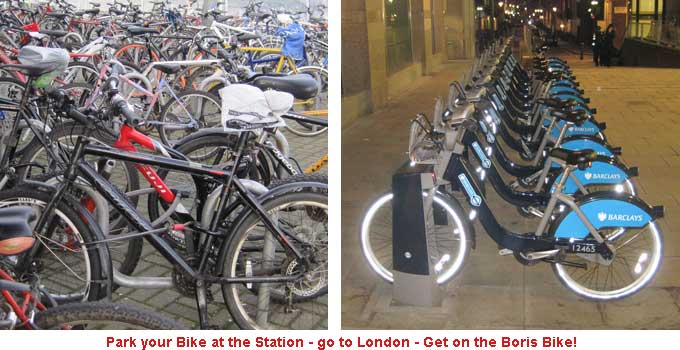 Another thing you find on your walkabouts is that Cyclists in London are much more disciplined in safety equipment; almost all wear helmets and I didn’t see one bike after dark which didn’t have lights front and back.

Drivers may say bicycles are a nuisance because of the weaving around etc. Pedestrians may say they are dangerous because they can’t cross the roads between cars for fear of being run over, but so be it.
We hear nightmare stories of Cyclists being cut up by cars and buses and being the wrong end of verbal abuse, but they are getting around without polluting the atmosphere, saving money and taking advantage of a fair and reasonably inexpensive option.