I first saw ‘Manfred Mann’ as they were then at Tunbridge Wells Assembly Hall way back in 1965. It was at the time ‘Come Tomorrow’ was released, their 7th. single and 5th top 20 hit.

From then on, both with Paul Jones then Mike D’abo as lead singers, they managed another 15 singles with 3 outright No.1’s and 7 others in the top 10.

When I stood as a late teenager of only 17 amidst the screaming girls and some rather embarressing dancing I would not have believed I’d be going to watch them play live some 48 years later. Bands at that time came and went and as much as I liked them, I thought ‘oh well, 8 years tops’!

In the last few years my Son has shown a great interest in 1960’s music, so much so that he probably knows more about some Bands than I do – the only thing I have a oneupmanship with is the fact that ‘I was there’!
So, when I saw the Manfreds were due to appear at the Folkestone Leas Cliff Hall on their 50th. Anniversary Tour, I couldn’t really let this go by without letting him and his girlfriend (plus me of course) go to watch them.

Like many Bands of that time, the line ups have changed as the years went by, but we still have Paul Jones, Mike D’Abo, Tom McGuiness and Mike Hugg in there with some extremely talented musicians in the form of Rob Townsend (drums), Simon Currie (Sax and Clarinet) and Marcus Cliffe (Bass). None of the new Band are, excuse me for saying it, youngsters, so you have that sound and attitude of those days way back when still there.

It was a packed house, but one thing which surprised me was that compared to the last time I saw them, everyone including myself was that much older. Also surpisingly my Son and his Girlfriend appeared to be the youngest one’s there by about 20 years, not that it bothered them! 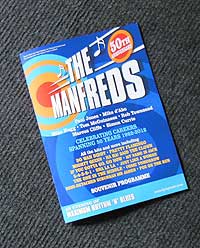 Needless to say they played all the Big Hits but this time did something which for me anyway was quite interesting and extremely good. Some songs were sung in a slightly changed format and the second Act set off with an Accoustic set.
Maybe there were some there who were expecting everything to be performed exactly as the records were back in the 60’s, but hearing ‘Semi Suburban Mr.Jones’ sung more as a balled was really quite moving.

I was a keen blues man back in the 60’s and I always felt that although they obviously loved their gigs, they’d like to be playing solid blues more and this was confirmed to me when ending off the first half they steamed through an incredible version of Smokestack Lightning. Paul Jones Harmonica work in that and through the whole show really shows he’s world class.
Memories of the Marquee Club flooded back I’m sure.

But for the Manfred ‘purists’ they got carbon copies of Do ah Diddy Diddy, Mighty Quinn and a few others. Everyone was catered for and everyone was happy. This showed in the long standing ovation they got at the end of the Show.

My thoughts when I got home was thinking how much they must be enjoying the freedom of movement if you like. Back at Tunbridge Wells in 1965 they’d have been bundled in and bundled out of the Venue to avoid over enthusiastic fans. Now they are back to basics doing Gigs as they once knew them to be; play the gig, load up the Van and move on to the next one, even finding time to sit down and sign autographs after the Show.

Sure three of them are 70, but to watch them play, they haven’t changed a bit. They sound the same and more or less look the same.

These tours are what memories are made of, long may they continue.