There are quite a few mysteries of life and why men do barbecues must surely be one of them. It seems they can’t make a cup of tea for themselves, but if there’s a chance for them to show off their masculinity, besides taking their shirt off on a hot day and walking up the High Street, it’s the garden Barbeque. 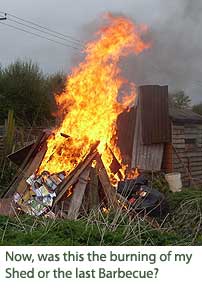 Here are some of my theories….

1. Guests are coming and they want to show that when it comes to the outdoor living, they’re the one.

2. Because Meat is a mans thing and shows command over other species (which is why you can’t tell the Onions, Peppers and mushrooms apart because of the black.

3. The Bottle of Lager always looks good on the side plate (Australian or American of course)

4. They can tell their Mates the next day how everyone said it was great (Salmonella caused by the uncooked inside of a chicken leg usually sets in after 24 hours by the way).

5. The neighbours see them cooking and think he’s wonderful.

Granted, it does at least give the poor Wife an evening off, just the evening mind you, because she’s been preparing all afternoon and will do the washing up afterwards.

What many people in this country don’t realize is the Americans have Barbecues at any time of the year. I recall having a barbecued meal every evening whilst staying with friends in Killington, Vermont in the middle of Winter with over four feet of snow and Bear prints every morning ! They’d simply take the food outside to the Balcony, put it in the Barbie, set the timer and hey presto !

To be fair, men do more cooking nowadays than back in the 50’s and 60’s, but we didn’t do Barbeques then – it was either silver paper lined Potatoes chucked on the Bonfire or Chestnuts next to them.

Finally, here’s my five top tips for a decent Barbeque………

1. Only invite Guests who have let you down over something in the past

2. Use Paper Plates – they burn better

3. Before eating, try the ‘sniffs and won’t eat it’ test on the Cats

4. Use water based fire extinquishers

So, there’s my bit of reverse sexism over with. I’m expecting all you Women to flood the praises on me for writing this and indeed, please do, but make us a cup of tea afterwards !

PS. I had some confusion between Barbeque and Barbecue – Apparently…..Barbeque comes from the French, “de barbe a queue”, from chin to tail, meaning roasting a whole animal on a spit.

Guess I could have just said BBQ!

2 Comments on “Men and Barbeques”

Barbecue or barbeque actually comes from the Spanish “barbacoa” which came from Arawak (Haitian Indian) “barbakoa”.