« Previous: Shopping – Running the Gauntlet
Next:60 years of TV Technology »

A very fine substitute for day time television is either looking out to the garden from a room indoors or sitting quietly in the garden itself. 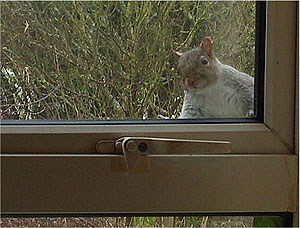 No matter where you look, you’ll find some creature or other showing us mere human’s what survival is really about, plus of course, the characteristics they bring with that.

The Squirel is a fine example, disliked by some, seen as a pest, but a small animal which know’s it’s way around just about anywhere and can get there by all sort’s of means.

Last year the Squirrels found great pleasure in devising way’s wo get to the Wild Bird Feeder, never a moment went by where I didn’t look out and saw one hanging on it, biting it or concorting it’s body into an impossible position to get even the tiniest piece of fat ball.

It came about that between them, they made a bit of a mess of the feeder itself, so I brought it around the back of the house, into the Kitchen and set about repairing it.
Now, small a Squirrel may be, but this one certainly had a brain which could work that one out and whilst sitting at the table, glanced up to find him gazing at me through the window with an inquisitive look on his face!

This year, to avoid total annihilation of the Feder, I’ve acquired a load of too small to eat Chestnuts from over the Lane and heaped them up in the corner of the front garden.
Worked a treat, except they obviously didn’t appreciate the way I’d done it and have now made countless holes in the Lawn to bury them in! 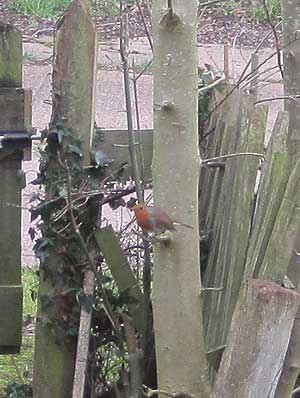 As far as Robins go, I wonder why we assume it’s always the same one which is following us around the Garden fleeting from Wheelbarrow to gate to branch to the ground not far away from you.
It seems they’re not really hungry, just want to know what’s going on for future reference.

Magpies are another nuisance and seem to be the Hoodies of the bird world. Ginger the Cat was once stalking one, slowly edging forward with that sliht swaying of the body ready to pounce.
Mr. Magpie it seems, knew exactly what was going on, waited until the Cat was no more than 3 metres away and swooped in on him.
I have to say, I’ve seen Ginger run, but not seen what must have been a three feet high jump into the air before heading off somewhere to sulk !

We’re lucky down the Lane, beside the usual Finches, Blackbirds, Sparrows etc. we have Wren’s which are usually too quick to see in detail nesting just above the window where they balance on the TV Cable before going into the Nest, Herons, Woodpeckers and the occasional Sparrowhawk and Kingfisher.

Then there’s the Foxes of course!

But all the observations just make up for one good entertaining day and a masterclass of learning.
They don’t need Supermarkets, a work place or central heating, they just need their own little bird brains !!

Long may they continue and long may we not interfere with their ways, they were after all, here before us !