The first major part of the Down the Lane restructuring and redevelopment programme was officially opened yesterday. Rumoured to have a final cost of just over 3 figures, the new Office rises from the ground in splendid glory to just over six feet and on a clear day can be seen from next door but one. 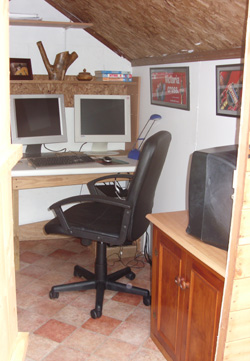 Twice the size of the old premises (to be used as new Chicken Shed under Phase 2), it is indeed an important landmark on the Kentish skyline and confirms that Companies of this stature are not suffering in the current Credit Crunch, but forging ahead with confidence of a positive future investing in high quality Infrastructure.

Before the official opening at 3,30pm (GMT), the Chickens were busy making last minute preparations digging up the insects around the Rosemary bush which had been pruned earlier in the day. Big Ron manned the Phone Switchboard but fell asleep, Ginger thought the guests may prefer Mouse to the wonderful array of Cheese on Toast and Mimi almost managed to find her way to the garden for the first time since 21st. September last year, I think it was last year anyway.

The Dragons Den Entrepreneur Peter Jones, who had put 78p of his own personal fortune into the Scheme, said he was very pleased with his investment and especially liked how the Helicopter Landing Pad had been marked out on the Greenhouse roof.

In his opening speech, Chief Executive Richard Cannon said that this is just the beginning and beyond Phase 2 he was already looking at the possibilities of installing an Electric Kettle and even a 6 gang extension lead rather then the existing 4 gang. He ended by thanking the following Suppliers…. 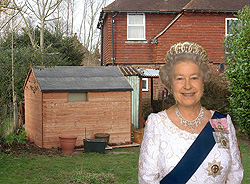 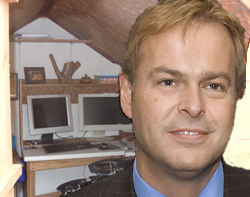 I can only describe this day as a special one. It was a day of breaking down barriers of indecisiveness, a day where determination won the Gold Medal and a day when all people can say “There is hope”.

(Dick Brayne can be seen daily going about his Community Service duties around Ashford but stresses that when he told the Manager of Burger King he takes 185 Sugar Bags in his Coffee and 97 Tomato Ketchup cartons on his Whopper, he was telling the truth)

Wow Richard I am soooo impressed. I hope Liz liked the cheese on toast of many varieties!!!

I’m sure I saw the grand opening on news24.

Nice to see old Queenie there in her sparkly hat.

Mind you, does that Peter Jones have a plan with regarding his investment? I see he’s doing TV ads now, maybe he’s a bit down on his luck and you might find him camping down in there making free with the new kettle to have a brew up?