There are two kinds of Rats in this country; the rats who rampage around houses, live in Parks and generally run riot where there’s any Chicken or Bird Feed around and the domestic Rat, a furry brainy Pet who will devote himself or herself to you. 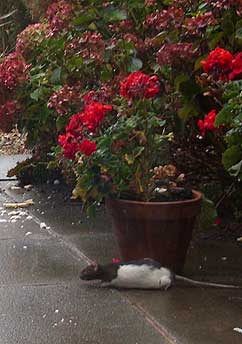 It’s when you get the cross over which this short article is about.

Yesterday, I called into see my Mother, she’s an avid Wild Bird Feeder and not being as active as she has been, loves sitting in her Chair looking out the French Windows onto her Garden Patio.
This area is full of ‘everything for birds’; there are hanging bird feeders, fat balls now and again plus endless amounts of left over Bread crusts and other birdy goodies.

There we are sitting having a chat about whatever and out from her hedge pops a black and white Rat. She explains to me that it belongs to a neighbour a few doors down and it decided the garden life was more challenging and likeable than being in a Cage all day with the occasional evening cuddle.

Out he pops bold as brass and in about 20 trips, completely emptied the Patio of anything, anything could eat. It appears he’s seen that the best place to nest is right beside a ‘walk in’ Rat and other creature restaurant and life was good !

Whether or not he will survive the winter which is rapidly approaching or indeed keep himself from harm from ‘proper rats’, who knows !

I deeply admire both foxes and rats. Although they’re a nuisance, they are extremely clever and will outwit us almost ten times out of ten. Maybe this is why we tend to hunt them, they’re simply more clever than us ! 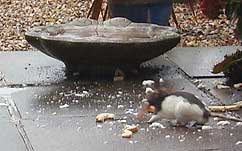 I have to say I gave up on trying control the rats around my Chickens, the Pen backs on to a field and no matter how much you culled, there would still be the same amount roaming around the next morning!

Strangely, they seem to vanish of their own accord. Sure they enjoy the Cereal field behind, but the suddeness of their departure is odd. There can be 12 strolling around one day and none the next and for weeks afterwards, then like they vanished, they appear again.

I feel both Rats and Foxes in so far as chickens go, get a bad press, after all, they’re only trying to eat and like us, if ‘the grass is greener’, they’ll go over the fence.
Why spend hours scavenging around bins for the odd scrap when there’s a Chicken Run just round the corner !
I’ve lost a few chickens to Foxes in my time, early on in my ‘home farming’ days I should add. The answer is not to sort these creatures out by foul means, but to protect what they’re trying to get more. However, I don’t say there are not instances where a cull is necessary.
For foxes, think ‘over, under and through’ and for Rats, think ‘leave the least amount of food laying around as you can’.

They do live side by side, it’s the law of the jungle and has been since evolution gave them to us.

As for my Mother’s Rat living in rent free accommodation and receiving full benefits of free food, good on him and I hope he lasts a good distance – he obviously has got a good brain !

He looks lovely! I have no problem with rats apart from the fact that they carry disease in their wee, I hate having to get rid of them.
When I was at school I used to bring the tame lab rats home to look after during the holidays, they were so clean and used to sit on my shoulder while I watched tv of an evening!

When I first moved to where I live now there was a family of black rabbits living up on the sand dunes, but they and their descendents are all gone now. So I was surprised at Easter to see black rabbits on the cliffs bear Brixham.