The Joys of Pet Sitting

House sitting is one thing, you can lounge on the Sofa all day watching Homes Under the Hammer, Flog-It etc., but when there’s pets involved it does bring about some extra responsibility and dare I say the word we love, ‘work’! 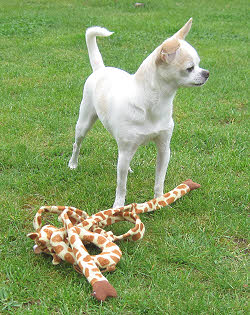 First there’s Louie, the two year old Chihuahua who thinks he’s a Rottweiler, in fact, if he see’s one, he’ll go for it hammer and tong.
He spends most of the day either asleep or tormenting the cat Jessie, who for some reason only known to her, actually likes him. They play and sleep together, but I still maintain it’ll all end in tears!!

Not content on thinking himself as a big dog, he also ses himself as a brave hunter. This means any neighbours cat entering the garden is barked and threatened. Should the cat suddenly take a run at him though, he’s also pretty good and running backwards.

There are two cats, Jessie, about 2 years old and Chilli who’s about 14 and too old for any malarky with either the dog or Jessie.
Jessie’s a good hunter and will bring the odd mouse in (see photo!). Mind you, good hunter? My Big Ron does the same thing with a rabbit every other day of the week!

After more the norm pets we have Shelly the Tortoise who likes a good stroll around the house and if you’re not careful can be about the right height to rest your feet on under the PC Desk.
If electro-stress is true then Shelley must be on her 19th. nervous breakdown by now.
She’s either amongst the PC Cables, on the French Door threshold or under the Cleaner Shelf in the Utility Room.
She doesn’t come out much but has a habit of letting you know when she wants to by head butting the glass doors of her Vivarium Tank.
Oh, also, if you forget to shut the back door, she enjoys practising sky diving! 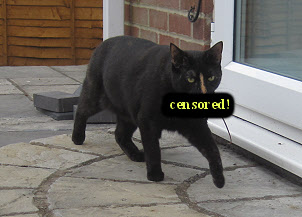 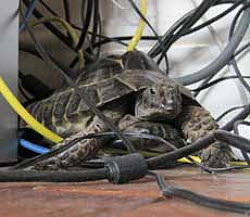 Lastly (except the 20 odd Tropical Fish) there the Gheko for whom I have the pleasure of feeding live Crickets every day.
Apparently, the bowl with some spongy type stuff in it has to be kept damp or, when shedding skin, it’s toes will drop off.
So, no pressure there then! 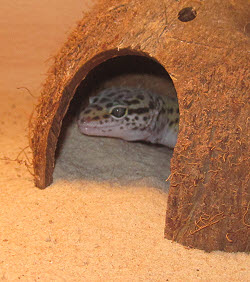 Needless to say there is an 8 page Spreadsheet on daily routines and feeding for all. I think I shall have to do one of those when people come to look after me in old age.
The other worrying thing is that t’s all supposed to take about half an hour and I’ve been doing it in twenty minutes – what have I forgotten!!

I’m sure all will be well, but should anything go wrong I wonder if the Kids will believe me should I say the Gheko’s skin changed colour overnight and shrunk a bit as well – will they notice the ten missing goldfish after 5 days of looking out for them because I told them they’re hiding in the Terracota Pot inside the tank?

After much thought and digesting the facts as I see them, I have decided my multi-million idea for a job as a full time House and Pet Sitter has one right out the window. Which of course reminds me of the day many moons ago when I let my friends two Parakeets out of their cage and inadvertantly gave them instant freedom through the Kitchen Window.

If I get through this without an invasion of Crickets reproducing all around the House and a Tortoise who was last seen going under the Bookcase, I’ll be lucky! Thereagain, it’s the variety of life that counts isn’t it?