When I first saw that Microsoft were bringing out a new Operating System and reading some of the reviews about the BETA version, I thought I may wait until they’ve reached their first Service Pack before purchasing. 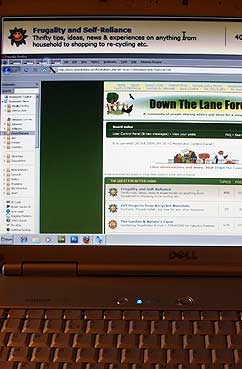 But, in the last two years I’ve had to buy a new PC Tower Unit plus a Laptop and both of these came pre-installed with Vista and with the nature of work I use PC’s for, Website authoring in Dreamweaver, Photoshop CS3 and other graphical type work, I found the programme increasingly tiring and slow.
Sure, Vista is great for all the arty appearance and techy visuals, but unless you had a real top range super sonic speed PC, it was not so good.

Then, last week I had a few problems and being just a few days before the Windows 7 release, thought I’d spend my lifes savings on the Microsoft Windows 7 Home Premium Upgrade Family Pack for XP or Vista users (PC DVD)

and do both PC’s (buying the 3-Pack is only a fiver more than buying 2).
It arrived on the morning of release date and within about three hours I had both PC’s up and running.

I expected to have to do the norm and change a few settings, look for new drivers, enter all my details again and so on, but this wasn’t so, everything was done for me and when I opened it, the System told me I had two drivers which were wrong and found them for me, no problems at all.

So first impressions of Windows 7
Certainly the installation easy and relatively quick.
Upon opening it (that’s half the time of Vista), it’s not all that distant from the Vista Layout, but cleaner and not so rich. It’s simpler and you’re not spending too much time looking for things.

The new ‘gadgets’ are pretty good. You have the magnifier (see right picture), which opens a window at the top of the screen and magnifies the area where your Cursor is, handy when you’re trying to read a phone number etc. on some of the high resolution modern Monitors!


My favourite is ‘the Snipper’. You simply highlight an area of your screen, internet or other, and click. Hey presto, you have a picture which you can save in various formats to your Pictures file.
I can’t quite see the reason for ‘the Post-it Note’ though, but nice idea!

But without a doubt, the thing it has above Vista is speed and this is simply all the graphical arty stuff isn’t there and you’re running on a PC using a lot less ram. There’s a better system of putting your favourite programmes in the bottom task bar and if you have many, you don’t have to arrow the ‘more’ button as it’ll take quite a few before it runs out of space.

Sure, it’s early days I guess and I may come across a problem, who knows, but usually they’re caused by me and not the PC!.
All in all, a satisfying purchase and not so expensive as earlier programmes as well. Microsoft have listened to problems and set about them in a positive way.
The only thing we’ll find for the first few weeks will be the up-dates coming through fast and furious. Some little gremlin will be found and each time that happens, you get that bloomin window coming up saying ‘Up-dates are ready to install’. The good news about it is that Windows 7 gives you a time it’s going turn off your PC or it will up-date when you next switch off.

If you have XP and are happy with it though, Microsoft are continuing servicing the programme until 2014 I believe, so you may as well stick with it, after all it’s a great Programme. But if you’ve Vista and fed up with slow operation – change to Windows 7 now !