When Frugal was just a way of life

To many people living frugally is something, for want of a better word, clever.
For some it’s a necessity, for some a kind of hobby but for many of those in my age bracket it’s just something we learnt or picked up from our Grandparents and have continued the trend.

In 1950’s post war Britain, no matter what social class you belonged to, you were still under the influence of things such as ‘make do and mend’, bartering Vegetables and Eggs with your neighbours or Allotment Keepers, you kept Chickens, cut your own firewood and had a Vegetable Patch down the garden.
Fair enough, some more upper classes weren’t quite the same – they could afford to pay someone to do it for them ! 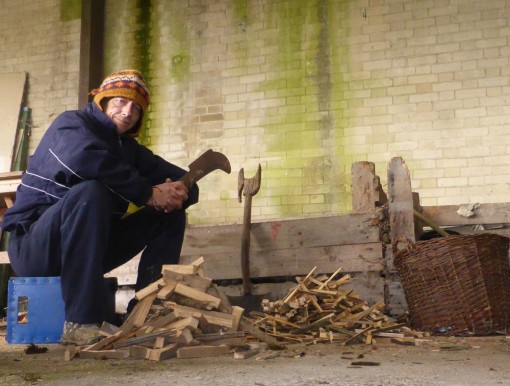 Chopping the Kindling with Grandfathers old Axe from the 50’s. All be it a tad tatty, behind is his coal shovel still in use

I could probably afford to go down the local Petrol Station or Wood Yard to buy Kindling or larger Wood for my Rayburn and Open Fire, but why do that when there’s an ample free supply on your doorstep?
In my case I have access to loads of old Pallet Boxes from the 1960’s and a fair sized Wood just down the Lane.

It just doesn’t make sense, whilst I have the health, to buy any. The money I save doing that can be used for more the treats such as my Photography Hobby or having a few breaks away here and there.

Just to remind me that I’m not being clever or ‘modern’, I still use many of my Grandfather’s Tools, most of which are either the same age as me, or older still!
Sure they’re tatty and some falling apart, but they do the job just as well should I go out and spend money on new ones.

But the job they do the most effectively for me is to remind me that these things were just a normal kind of existance when I was a young lad when I’d follow Grandpa down the Garden and watch him digging the Vegetables in his Percy Thrower style tweed jacket, shirt and a tie (I wear joggers and a past it’s sell by date jumper though!).

The more time has gone by since I downshifted from ‘a proper job’ in 1999 I’ve learn to see it more as living a simpler lifestyle rather than a frugal one.
Simpler may not be exactly the right word – walking up the Garden on a windy cold January day to feed the Chickens, digging soggy soil in March and sawing up loads of wood isn’t exactly simple, but you’re not conforming to what modern living is about; you’re taking away the complications, you’re knowing where your food is coming from at a tenth of the price, but most of all you’re not spending money when spending money isn’t needed.

I sometimes think to myself if I hid all the technology away from the House and invited my Grandparents to spend two days with me, what would they think?
I think they would just slot in as if nothing much had happened in the last 50 / 60 years or so.

The sad thing and what they would probably notice is the diminishing wildlife population, but that’s another story!

Livng a frugal life is not something new, it’s simply copying either through personal experiences and memories or researching what it was like through those post war years.

Live the dream and live a simple life!