With a title like that, it can only be Cricket !

Well, we can’t complain too much about the weather down here at Kent Cricket Club this season. Up to now, it can’t be more than three or four hours lost since we started what
seems light years ago in April.
But today, it rained, indeed a rare event for Kent in the last six or so weeks and as a Vegetable Gardener, I can’t complain either. 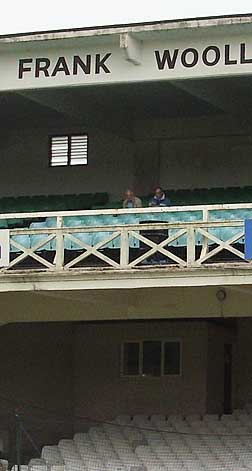 There are quite a few observations to be made at a Cricket Ground when the heavens open. Although it started raining at 6am and hasn’t stopped since, still prospective Spectators

Attendant and not in charge of the Switchboard. If so, I think the reply would be “Look out of the window” and “Your guess is as good as mine.

To be fair, there are the brave few who regardless of whatever, still arrive at 9.30, clothed in Macs, an extra Jumper and Thermos. They sit there with great patience without

complaint, it’s a part of our British Constitution I think!
Even so, the odd one or two will come over and say “Looks like this is going to last all day”, well, I guess the answer to that should be, you shouldn’t have come then.

But to be fair, they are here through loyalty and the chance to sit in the Pavilion with the 30 other people who’ve turned up, chat about the Season gone, the Weather and guessing

what time the game could start around approx. 25 scenario’s!

For the background Staff such as the Groundsmen and myself, the worse scenario is that it stops raining around 4pm, but although the Pitch is obviously not going to dry in time, the Umpires, following ‘regulations’ have to hold back their decision to call it off before any play would be possible, this usually being about 5pm.
So, after two or three hours of blotting up the wickets, taking all the covers off, they have to put them all back on and close up for the day.

It’s about that time that the Players realise they haven’t had enough exercise and decide upon some training out on the soggy grass. Off they come about 5.45pm and on passing me, say “Oh well Dicky, early night then”. They say this in sheer innocence not realising they have now trodden about 10 kilos worth of grass and mud all over the carpets and Shower Rooms, plus bunged their dirty and damp Training Clothes on the benches.
Well, it’s the rough and the smooth I suppose, sometimes you win, sometimes you lose, but at 10pm when you finally leave the Ground, you can’t help thinking where the day went.

The weather is an accepted part of Cricket, the Players accept not getting a result because of it and the Members a chance to enjoy the Cricket Ground with no one in it.