Trying to do the norm

« Previous: Bike GPS Expert – Not!
Next:Looking after the Grandchildren »

You know how it is, you’ve worked umpteen weeks at break neck speed and at long last get a few days off where you can go to visit the family and do your own thing a bit. 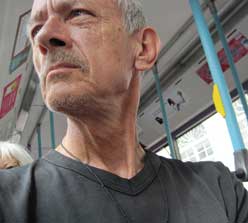 Having family who live very close to Southampton, I thought I would reserve a day for just having a few hours walking round the city looking in shops and generally doing what most people do.

Having a bus pass helps and so I made my way down to the Bus Stop to catch the first available bus and enjoy the route into the City. When I got on the bus I was feeling quite healthy and really up for it, but I forgot I was getting the first ‘Pass Bus’ and was accompanied by many people of my age and above.

This is obviously quite a social event for many and gives them a chance to catch up with all the latest news around their particular neighbourhood. I heard about Jim who passed away last week. Apparently it all started about three months ago with a pain in his side, he saw the Doctor who sent him for an x-ray, the rest of the story is obvious. This doesn’t bear too well, especially when you yourself have a had a recent pain in the side and wondered what caused it!

Then there was neighbour Nancy’s daughter. Oh dear, she’s had a hard time of it. Apparently three kids and the husband has to work away and they sold the car, so she has to take the kids to school on a bus and so on.
Maybe I joke and to be fair, much of this is fairly common to many. You hear ‘the real live’ travelling on a Bus. 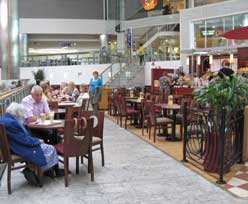 Upon arriving at the City Centre, I alighted and made my way into West Quay, the large and modern Shopping Centre where you can buy just about anything you don’t really need etc. As it was a kind of treat day, I thought I’d have a breakfast, something I rarely do when I’m out, but thought I would throw my frugality to the wind for half an hour and gorge myself with a ‘Full English’.

That was good and set me right for going around the shops. I have quite a lot of clothes to wear at home, but about 75% of them have ‘Kent County Cricket Club’ written all over them. A quick in and out of Primark saw me fork out the amazing sum of Â£4 on two T-Shirts, silly really, they’ll last me about five years and I spent more on a Breakfast which lasted me five minutes!

This was followed by a walk round a few other favourite shopping venues, two Bicycle Shops, a Camping Shop and Maplins. I didn’t buy anything as I didn’t need anything, but it’s nice to see all those things you’ve already got or wonder at the Tent which is six times more expensive than yours but you know you’d only use it about two days every four years and calculating my age and how long I’d be having camping holidays in the future against that, the only good to come out would be for the person who finally gets it!

Ah, a sudden thought came over me, my daughter needed a new tie for her cycle computer, so this meant a jolly good look round Robert Dyas. This place was good, everything from a sink plug chain to a Hammock.

What I thought would be a five hour outing down to the Shops, resulted in just over ninety minutes, I’d become bored and just wanted to get back to the House where I could be myself again and not have to pay Â£2 plus for a cup of coffee.

I guess I would sum up by saying that we all have this tendency to want on what’s on the other side of the fence, but all too often, after we’ve been over it, it’s not really something we truly want deep down.
Sure it would be nice to have a wad of notes occasionally to buy things with, but even then, I think I’d only buy things I need at the price the item is of value to me.

The bus ride home was a pleasant one, full of people with their bags of shopping and a look which said they were going to put the kettle on as soon as they got in. If anything it showed me that an Englishman’s home really is his castle. The outside world is nice, but there’s no place like home!