Amongst our Garden wildlife, there can’t be a more industrious, inventive and plain scavenger as the Grey Squirrel. 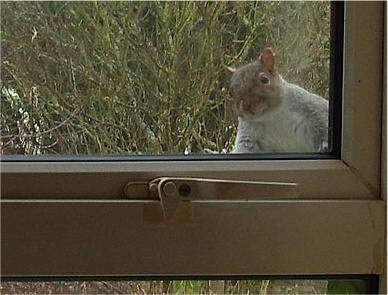 Over the last few month’s I’ve been doing my bit for the wild birds and feeding them Peanuts from at least three containers, all tied, hung, suspended, angled, on wire, on a steel pole with furniture polish down the sides, but our little grey friends still get to it!
In fact, feeding the birds is now more expensive than feeding the chickens. Without the Squirrel, it would be much less ! 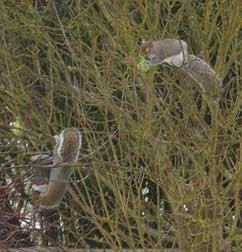 It seems they come to expect it. If I move the feeder for any reason, the look of shock and loss is quite apparent.
The other day, they knocked the Feeder off a branch (after demolishing three fat balls). I went to pick it up only to find the base was a bit wonky, so I take it into my Kitchen and start repairing it on the Table.

Suddenly there’s a scratch on the window and there is one, nosily peeping to see what I’m up to. For five minutes he or she sat there gazing in, long enough to take the picture above.

The problem is that you want not to eat the bird food, but the Squirrel is capable of feeling sorry for itself so much that you just end up having a guilty complex.
I shouldn’t really, there’s enough Hazelnut, Chestnut, Oak and other nut bearing trees around here to keep a large population of Squirrels going for about the next two hundred years, subject of course to some bright spark Housing Developer deciding to cut them all down and build some concrete boxes where they once stood.

It’s the same with chickens I guess, where there’s feed, there’s rats, so you end up making them happy as well. Feed one thing and feed the rest as well !

But who can really blame all the ‘pest’ creatures, they have themselves to feed plus their young of course. A nuisance yes, but a querk of nature we must accept.

Way back, probably the late 50’s, Local Council would pay you a shilling (5p) for a Squirrels tail just to get the numbers down. I don’t know if anyone made any money from it – if they did, it didn’t work!

So I guess I’ll just carry on spending my children’s inheritance on feeding creatures who are quite adept enough to feed themselves.

I’m not annoyed about it, who could be! To see the full picture of nature is better than only seeing some of it and you have to admit that the pleasure of watching all these things that nature has given us is highly entertaining – most of the time !
.

So I guess Iâll just carry on spending my childrenâs inheritance on feeding creatures who are quite adept enough to feed themselves.yes u are right