Transfer Deadlines – Back to Grass Roots!

Tomorrow see’s Football’s mid season Transfer deadline and whilst everyone is talking millions of Â£’s both in transfer fees and wages I thought it a good time to remember there is life outside of the Premiership and to a certain degree the Championship.

How often do we forget or not support the Non-League Clubs and others who play for the Village Team from sheer enjoyment and a competitive spirit?

I’m a great Southampton FC supporter, although they are 130 miles away from here my family live there and over the years have become quite attached to the place. Some say to me why support a Team 130 miles away, my reply is always why do others who live much further away from the Team they support follow them and in many cases they’ve never seen them play or even been to the City or Town they represent. I think you probably know the Teams I’m talking about !!

My main following of football though is on a non-league scale, I watch my local Team Ashford United in the South Eastern Counties League and also Tonbridge Angels in the Conference South, I lived close by as a child and went to watch them play when I was a child in the 1950’s (they got 3,000 plus attendances back then!).

I occasionally stop and watch some football if I see a game going on somewhere as I’m passing through, don’t usually know who the Teams are but enjoy the spirit and shouts from the Player’s which are on a par to the Premier League, if not more so sometimes.

Ashford United is a Club which defines today’s game along with it’s struggles well. Once in a League two grades up from here they are now, they suffered financial loss and were relegated because of that.

There is nothing better than going to watch them on a Saturday afternoon, they’re doing well and slowly creeping back to where they once were, the attendances are averaging out to around 250 per game and that matches only two other Clubs in the Division. 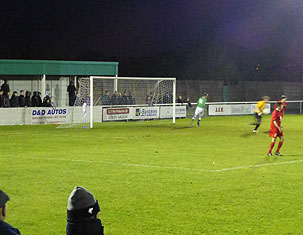 It’s not only about skill, it’s about ‘belonging’ and feeling a part of something, a feeling you are playing your role as a local citizen and respecting the Players for what they are and even if they are a few grades down, they are supplying you with entertainment.

The Players in these leagues are mainly made up of those who almost made it, those on the way up and those who have reached their level and quite happy with that without losing the desire to win.

The game of football is about winning, it’s about ‘if you can’t win a game, make sure you don’t lose it’. That sentence does not only relate to the Premiership, it relates to all levels.

Premiership Football Stadiums are a mass of commercial enterprise, they are a business involving millions of Â£’s. The small Clubs are the same but the attraction for support both by Companies and Fans is obviously less.

It shouldn’t be – back to grass roots !