Window shopping around Ashford of late is just that, the only thing they contain are the windows and empty spaces behind.

Only a couple of years ago or so it was just the little Shops you saw coming and going then the demise of Woolworth seemed to set of a chain reaction amongst large Retailers who appeared to suddenly wake up to the fact that they weren’t just fighting out of town retail Parks but the Internet as well.

The worse part of it is that in an innocent way we’re partly to blame. How many of us have window shopped solely to see an item we’ve seen on the Internet, hold it, get an idea of it, then said “No thank you” returning home and buying it cheaper on the PC? Quite a few I think!

But why not, we want the most cost effective item at the right price. Even the Retailers who have, or are, going down offer lesser prices if you buy online that in the Store, then to rub it in they say you can collect it from the Store yourself!

Unfortunately it’s a problem which is not going to go away and we’ll end up with just a few giant Companies selling online with maybe a Collection point – and that’ll probably be in a Retail Park out of town. 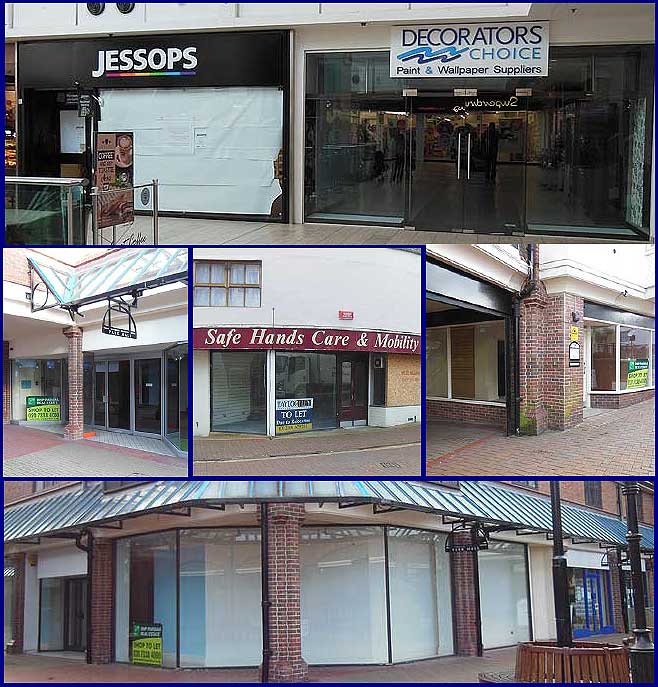 Whatever, it would seem the High Street is doomed. All we’re left with now is more or less Pound Shops, Charity Shops, Banks, Travel Agencies, Pubs and the odd Sandwich Bar.
Gone are the days of the Butcher, Baker and Candlestick Maker, the Hardware Store, even the Department Stores in many towns are packing their bags leaving thousands of square feet to the echos of the past.

What’s the answer? I don’t know and I doubt if many do. Unless Local Councils can sit down and come out with some decent plans for rejuvenation, make car parking easier and cheaper, maybe free to compete with the Parks and / or make Rents more attractive we’ll end up with huge Residential areas where in 50 years time people will walk down them with their kids, as I do with the Village where I was born” and be saying “That was once the Camera Shop, that was once the Shoe Shop…..” and so it goes on.

But before then, with the Internet technology gaining the speed it is, maybe the Retail Parks will be doomed as well !

Finally, there’s the human cost, many keen and loyal Staff now without a job and in most cases let down and sacrificed by high Management who probably have Directorships on another half a dozen Companies to keep them going.
Shop Staff of a certain Camera Shop in Town were told on Friday not to come in Monday.