I guess it’s only natural that six month’s after completing my John O’Groats to Land’s End Cycle ride (six months and two days ago!) say “Got over your bike ride yet then Dickie?”.
Well, the answer I give is always the same….”No”, but this isn’t a no in the sense of being physically exhausted, it’s a no in so far as it has changed me in many ways.

It wasn’t so much the sense of achievement I got through the the mileage; at the end of the day, you wake up, have breakfast, get on your bike, pedal and see where you are six hours later! It was about other things…

I think the main thing and it sticks out above the rest, is it gave me hope. Hope not only for myself but passing that hope onto others who may feel that life is all downhill after you get to 60 or so.
I met so many people in their 60’s and 70’s going around on Cycles, Motorbikes, in Camper Vans, even Barges, simply enjoying themselves. Few had an actual plan, they’d just said ‘let’s go somewhere’ and they did just that, no return dates firmly fixed, just doing their own thing at their own pace.

Before I left for Scotland on that late June morning, I was seriously and foolishly thinking 1. I couldn’t do it and 2. It would probably be my last big challenge in life.
How wrong I was!
I’m already planning for 2013 when I hope to either cycle round the whole coast of Scotland (40 days or so) or taking a package Trekking holiday to the foothills of Mount Everest, a mountain which has captured my heart since, at the age of five, I saw the picture of Hilary and Tensing standing on top of it.
Whichever I don’t do in 2013, I hope to do that one in 2014. 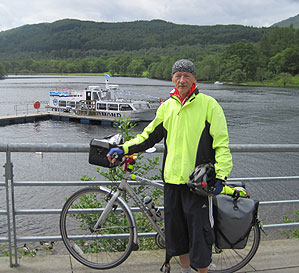 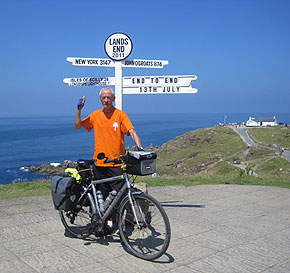 Back to the cycle ride. Hardly a day goes by when I don’t go to Google Earth street level and re-live a few miles, stopping to pan round and thinking ‘I remember that’ and ‘where’s that strange house I saw on the lane between Kendal and Lancaster’ etc.

It really is a bit like being a child again, I go to bed and if I’ve had a stressful day, lay there and remember the people I met on the way, how much they inspired me and made me laugh; the Down the Lane Forum Members I met and had a good time with.

Most of all and apologies if I sound like I’m preaching, one should never say ‘I’ll never get around to doing that’. The moment, the dream has not gone by and even if health has intervened in an unwanted way, there are variations of that dream. If you can’t cycle that journey, do it by car or some other means. But follow that dream and face the challenges of it.

Finally, when I stood at the signpost at Land’s End and I’d felt this quite a few days previous to that, I had not felt fitter for years, I had positiveness written all over my head, I had a sense of taking a journey. It was the best thing I had done for years and I like to think it rubbed off on to other people who may have felt I was starting to graze a tad!

John O’Groats to Land’s End by Bike – Follow the whole ride day by day with Garmin Route Maps (view on Google at Street Level) and loads of Photo’s.

Well you inspired me Richard, to stop thinking about what I want to do, and just do it. I am also thinking about what next, where’s the next long walk going to take me. I totally agree when you say you never felt fitter than when you reached the end, I had that feeling as well. We have no time to stand and stare. Good luck for 2012.